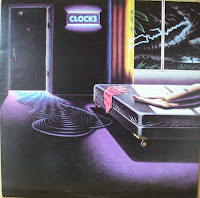 You don't hear much about bands from Wichita, KS, and that went double for me, given The Clocks (not certain if the "The" was officially part of the band's name - it isn't on the album sleeve) were a couple years ahead of my time. The album's lead-off cut, "She Looks a Lot Like You," purportedly made a measurable splash on MTV during the channel's infancy. The Clocks played fairly straight-down-the-middle. AOR rock a la Off Broadway USA, The A's, and arguably, even Cheap Trick. Flourishes of keyboard, especially on the animated "19," exude faint "wave" tendencies, but not enough to jettison them into that threshold. So far as I know, there was no immediate follow-up to Clocks, however 2004 saw the release of a "new" Clocks album, The Black Box, on Zip Records, featuring early demos, and some new tunes spawned from reunion sessions during 2003. Black Box is still available here.

Get the reissue here.
Posted by spavid at 6:32 PM

i only had the zip records cd - thx for this

Aside from the fact they had a video on MTV and were the only rock band from Wichita, Kansas to have a Top 40 pop/rock hit, they have another claim to fame.

In November of 1980 they were (for some warped reason) the opening act for Black Sabbath, who was on their Heaven & Hell World Tour.

The opening act had not been announced before the show, and the lights went down, and here they were.

Everyone began to boo loudly. Within seconds of them beginning to play, a rain of loose change, cups and trash was flying onto the stage. They struggled through a couple more songs, and then the lead vocalist/bassist announced "Ok we're only going to do one more song...".

That was the only moment they got a rousing cheer from the audience, which was immediately replaced by more loud booing, and the torrent of loose change and trash increased dramatically.

A friend of mine was a local stage hand who worked at the show. He told me years later he got over 50 bucks in loose change from the stage, and that several other roadies made just as much.

It was not entirely their fault.
Only an idiot would have booked a band like that to open for the Godfathers Of Metal.

But they were not entirely blameless.

They were fucking idiots to agree to play that gig.

Needless to say, Black Sabbath took the stage half an hour later and destroyed the venue.

Too bad The Clocks had to suffer such a fate, but oh well, that's life.

Sad story. Thanks a lot for the Lp. Saludos.

Yes, the Black Sabbath story is true.
At that time, The Clocks were basically the house band at a club on South Hillside in Wichita called The Tennessee Gin Mill, although they played other places as well. I lived a block away and was there almost every night for a couple of years. They were an amazing band in a live setting like that.
I remember when they were gone for a while in LA to record the album for Columbia. I had a top of the line Panasonic "boom box" back then that had RCA inputs and had a setting for "metal" cassette tapes ($12.00 for a 90 min tape). They let me plug in to their board and record an entire night one time. I still listen to the tapes sometimes, and have converted it to a really great sounding CD (for my personal use only, although I gave a copy to them in 2003).
I have lived in Kansas City, MO since late 1982, but got to see them in 2003 at a concert at a bar in KC. Jerry Sumner, the lead singer, sat for quite a while with my wife and I, and I got some great pictures of us together. Sadly, the drummer, Steve Swaim, passed away not long after that.

Thanks Eric. Didn't even know that anyone commented on Clocks untilnow, and yeah, that Black Sabs story is a trip. Very sorry to hear about Steve. Listening to "She Looks a Lot Like You" always puts me in a bittersweet mode to begin with for some reason, and even more so now. If you ever feel like coughing up that live tape I'm all ears. Thanks again.

BTW, the album has been "reissued," but I hasten to say if it's legit:

I just picked this up at a pawn shop today. I'm excited to give it a listen!

I think I saw them open for Johnny Winter at the Cains Ballroom in Tulsa. I know I saw them a couple of times at The Tennessee Gin Mill.