It seems every year I come across a seriously Chaunkah-worthy indie pop relic from the Reagan-era (or in the case of these Canucks, the Mulroney era) that was entirely unfamiliar to me the year prior.  So how did Toronto's Plasterscene Replicas make my much belated radar? 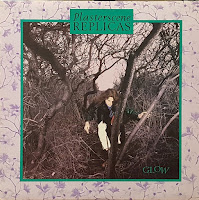 I believe I encountered their name in the "thank you" credits in a Change of Heart album, and by coincidence, not long after, I found PR's Glow while browsing at a record store up north.  Truth be told, I've presented a lot of bands like the Replicas over the years - forward thinking guitar rock with mildly oblique lyrics and a dash of melancholia.  Sonically, they fit the bill as well - sweet, echoing guitars that are simultaneously crunchy yet jangly, backed by a tight, spotless rhythm section.  In short, a shoo-in for the college radio circuit, though I'm not certain how much traction PR had south of the Canadian boarder.  And almost everything here is golden - "What Could Be Incomplete," "All I See," and the sprite, assertive opener "We Can Walk" to name but three.  Glow often emanates the feel of a vintage Don Dixon or Mitch Easter production, and while there are traces of Game Theory and early Dreams So Real, there are beefier angularities that point to the likes of early Northern Pikes, Big Country (less obviously), and the Replica's Irish contemporaries Cactus World News.  I'm lovin' this one mightily.

PR co-guitarist/frontman Charlie Salmon passed on in 2013.  An article on Toronto's Now magazine site offers some background details on him and the Plasterscene Replicas is general.

great band! saw them live a few times back between '88 and about '91. songs had a bit more 'bite' live. largely forgotten. another band from the same era was Heimlich Maneuver, from just down the highway in guelph.
thanks for posting, parted with this record years ago

How do you keep finding these things? Is there no end to the number of great 80s college/indie/jangle rock bands out there? This is great stuff! Thanks again!

Glad you like. No, Pernt, there is no limit...one can only hope.

Heimlich Maneuver? Never heard of them, but will see what I can get my hands on. I have a comp of Guelph area bands that I might try to post in the new year.

Thanks so much for posting this! I bought this album a few years after seeing them play at my university pub sometime in the mid 80's. They sounded even better live, especially seeing them in a small venue. I've been meaning to transfer the LP to FLAC/mp3, this download will be much quicker. Thanks!!

Thanks for the love! It's nice to see that people are still discovering our music after all of this time. If you want any more info, please feel free to get in touch.

Been looking for a digital copy of this. Used to love listening to PR on CFNY 102.1 in Toronto. Any chance you could re-up the MP3 file again as it is no longer there. Thanks!