For the past two years I've offered a bundle of seven singles for one of the eight nights of Chanukah.  I'm truncating that a bit this year.  In fact, I've put together a rather idiosyncratic hodge podge of stuff, of which you might only be interested with two or three things.  Some titles I've inserted are more for historical use than anything else, but read on. I've been deficient on sharing singles in 2017, so maybe I'll try to put more emphasis on them next year.  For now, here's what I've set the table with.  The download link at the end is for a bundle folder of all five records.  Please note, for the Soup ep I only have MP3s available. 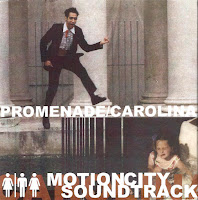 This is the most apparent anomaly of the bunch.  I have written about MCS on several occasions, but this is likely to be the last given they dissolved in 2016.  Not quite punk...or emo...or indie rock, Justin Pierre and Co. were nonetheless the most gratifying thing to come out of the Twin Cities since the Mats and Husker Du.  And, yes, that's saying an awful lot.  This record preceded their first album I Am The Movie by a good three years, and even if it's not thoroughly representative (e.g., no keyboards were employed for this incarnation of MCS) structurally things began to take shape here  The A-side, "Promenade" concerns a boy who struggles to muster up the courage to ask a classmate to go with him to, you guessed it, the high school prom.  A dilemma that has plagued men from time immemorial... 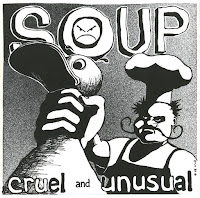 I had posted this title to a want list I shared many years back.  Still haven't found an affordable physical copy, but I do have quality audio files to offer.  Soup were Berkeley, CA basement punks
who eschewed hardcore in favor of a mellower modus operandi, but characteristically rambunctious and informal.  Doggedly DIY and lo-fi, the band had an especially unique microphone fiend in Chris Giese.  After Cruel... was cut, an equally appealing Soup spinoff band, Buggerall existed, but details and recordings are woefully scant.  Alumni from both groups participated in Samiam, Wynona Riders and Sweet Baby  Cruel and Unusual is a small-of-fame favorite of mine, and if you like what you hear there's also this. 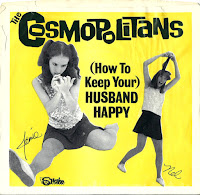 A Mitch Easter (yep, him again) production credit lured me to this single, not so much the attention grabbing picture sleeve.  The Cosmos (that's how I'm referring to them) were a kitschy female duo comprised of Jamie Sims and Nel Moore who briefly managed to ingratiate themselves into New York's wave movement.  This single, featuring their signature number "(How to Keep) Your Husband Happy" is novelty as they come, and strikingly dissonant on top of that.  The tune in question features prominent dialogue aimed at any and all wives within earshot on how to sustain marital bliss.  The effect is similar to what Nada Surf employed on their alterna-hit "Popular," but I can't quite ascertain if the Nada guys took inspiration from the Cosmos.  Wouldn't surprise me though.  The dancy, B-52s-ish "Wild Moose Party" is the stronger of the two flips, but there isn't an iota of tuneage on this record that would suggest Easter provided any creative involvement or insight.  BTW, Faye Hunter of Mitch Easter's Let's Active is credited with backing vocals. 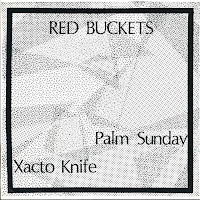 This one had been on my want list for a spell.  And speaking of spells, I was under that exactly upon hearing Red Bucket's contribution, "Something Else Again" to the I'd Rather Be in Philadelphia compilation.  That song portended an intoxicating and edgy merger of post-punk and power pop.  This single, the Bucket's lone proper release, was a must have, and low and behold this year I was fortunate enough to track it down.  The two songs here skew more to the post-punk side of the spectrum, not instantly memorable perhaps, but more rewarding on subsequent rotations.  Recorded as a trio, the Buckets appended a fourth member, Michael Carlucci who did double duty in Winter Hours.  As a quartet, R/B seemed to embrace a more melodic penchant.  This development yielded a sound more in keeping with The Feelies, whom the band also had ties to.  You can read a much more exhaustive history on the Buckets over at tapewrecks blog, who are also hosting a handful of the combo's excellent unreleased demos. 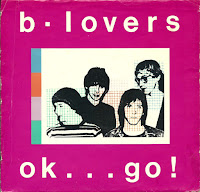 And last but not least, a pit-stop to Champaign, IL for the B-Lovers one and only wax artifact.  I've been an enthusiast for a wilfully obscure chestnut of an indie-jangle masterpiece titled Soul Light Season, a 1985 ep made responsible by none other than Turning Curious.  Only six songs that one, and nothing more in the archives, so when I discovered that T/C began life as B-Lovers, and released a 7" no less, I jumped on it like white on rice, as they say.  The three compositions adorning this rare lacquer aren't as sophisticated as their future Turning Curious endeavors, but the creative germ was firmly in place and still fairly delightful.  Singer and frontman Nick Rudd would eventually concoct music in the latter half of the '80s and beyond in aggregations like The Arms of Someone New, The Big Maybe and Weird Summer.

Download everything in one fell swoop in your choice of  MP3  or  FLAC
Posted by spavid at 4:37 PM

you're an effing national treasure, you are.

When my now 30 year old daughter was 3 years old, "Wild Moose Party" was her jam. Fast forward 25 years and for her 28th birthday the redoubtable Jamie K. Sims sold me a t-shirt and sent me some swag for free to gift her. Mad props.

THank you for restoring a building block of my musical infancy - "With Debbie!" the first really cool tape off the radio (wish i had it still) i made had "how to keeep your husband happy', they must be russians doing a song about venereal disease, Half Jap "oh, Nicole Told Me" still great song, Higsons 'i dont wanna live w/monkeys' Delta 9 'try', and most of all.. the Fall "New Face In Hell". Imean...fuck me, i think it was the first punk/new wave show i ever heard had all that! wlrn miami- for a meager two hours a week so they packed it up full.
Cosmopolitans held up better than i'da thunk. quite nice

If there's any chance I could get a second crack at B-Lovers, that would be terrific.