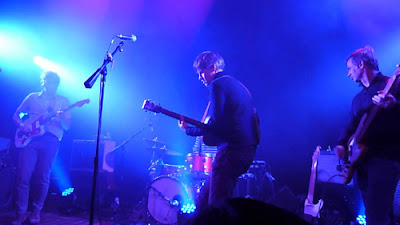 This was a serious contender for one of my Chanukah shares a couple weeks back.  I didn't want to wait until next December to post this, so here it is, an extra ninth night so to speak.  It was just last year in fact that I delved into The Ocean Blue, by way of a clutch of demos and comp tracks recorded prior to their 1989 self-tiled album.  There's not much more I can extol regarding this long-running Hershey, PA combo that I didn't address previously.  Chiming guitar pop may not have been their name, per se, but it certainly was their game, and they won people over like myself with a thoughtful predilection that persuaded both collegiate rock audiences and comparatively straight and narrow types.

The concept for the Ocean Blue's concert at Lincoln Hall in Chicago last spring was pretty straightforward - performances of their first two albums (1989's Ocean Blue and 1991's Cerulean in their entirety.  This is an above average audience recording with a meager amount of crowd noise.  The reproductions here compared to the studio incarnations aren't dramatically different, but when it comes to their ilk, it wouldn't make much sense to improvise or go on a tangent.  All the classics are present and accounted for - "Between Something and Nothing," "Drifting Falling," "Ballerina Out of Control," and the strummy "Vanity Fair."  We even get a Pet Shop Boys cover to close things out.  Full tracklists are as follows, and these sets are available in both in MP3 and lossless FLAC.

I'm happy to hear these. I recently grabbed the OB download at dbs-repercussion, which made me dig out the four OB CDs I own to be played this week. The Pet Shop Boys cover is a real surprise, though not very good, I'm afraid... LOL. And "Between Something And Nothing" remains the best song that you'd swear Echo And The Bunnymen wrote... but didn't.

I didn't say this during the holiday week, but thanks for the many FLAC files you were able to offer this year.

I just saw them at Lincoln Hall this Sunday! It was a great performance. Can you reup these recordings when you get the chance? I was right there in the front and all the audio of my clips are blown out.

Thank you so much for these!