Cheap Trick - One on One and Next Position Please session outtakes, alt versions (1982-83)

I'm going to go out on a limb here are say something that many of you may find to the contrary, yet I know in my heart of hearts I'm correct.  Cheap Trick haven't made a great, thoroughly consistent album since roughly 1983.  I said it, and I'm sticking by that assertion.  Then again some critics would go as far to say that the band started to lose it all the way back to the Dream Police era. 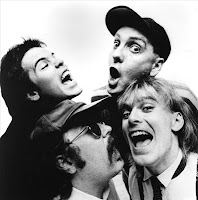 It didn't help that the follow-up to Dream Police, the ill fated, George Martin-produced All Shook Up, was an unmemorable and unrepresentative misstep, but Robin Zander and the boys recovered on their sixth and seventh platters One on One and Next Position Please.  Granted, neither of those records saw the band regaining their once idiosyncratic footing of their initial trifecta of masterpieces (Cheap Trick, In Color and Heaven Tonight), but One on One, and especially the Todd Rundgren commandeered Next Position... proved to genuinely satisfying pop-rock jewels, that at their infrequent worst were a tad frivolous.  Even more remarkably, the band cut these disks without the involvement of longtime bassist Tom Peterson.

Amidst this 21-song set of alternate takes and works-in-progress for the aforementioned 1982/83 disks, we don't get to hear variations of some of their best songs from this era - "She's Tight," "I Can't Take It," and "Next Position Please" to name a few which are sadly AWOL here.  What we are treated to are refreshingly raw romps through equally stimulating salvos like "Lookin' Out for Number One," "Love's Got a Hold On Me," and "You Talk Too Much." Other cuts are represented in their instrumental versions ("Play By the Rules," "Invaders of the Heart").  Fun, but it helps to familiarize yourself with the album versions first if you haven't done so already.  There are no less than three distinctive versions of Trick's power ballad "If You Want My Love," plus an outtake of "I Want Be Man."  If you recall, the vocals on that particular One on One monstrosity were gratingly mechanized, but on this alternate incarnation, not to so much.  The entirely unreleased "Fool Yourself," vaguely angles back to their earlier stuff, and we even get another exclusive number in the guise of "Tell Me What to Do."

An enormous amount can be said about Cheap Trick's post-Next Position Please era, the vast majority of which is quite unflattering, at least speaking in terms of recorded material.  They hit a colossal low in 1987 with Lap of Luxury, the album that generated the fluffy, antiseptic monster ballad, "The Flame." It would be another twenty years for them to approach anything resembling greatness.  For what it's worth, their 2006 set, Rockford is deserving of any Trick fan's time and dinero.

Thanks for this! And while I'm a little more forgiving of their work the last 25-ish years, I was glad to see you liked "Rockford". I think it's right up there with their best.

Many thanks. I've found that Cheap Trick are one of my favorite classic rock bands, even over Aerosmith, & Alice Cooper. ( Who are great, also )