On average I purchase anywhere from 25 to 50 vinyl EPs a year from bygone indie artists that were only active in the late twentieth century.  Here are some of the better catches from my fishing net, including two acts who haven't shown their faces on these pages before. 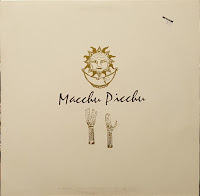 Their name may conjure up a locale that's high and mighty, but Macchu Picchu's aesthetic was considerably more down to earth.  A co-ed New Jersey six-piece, these guys (and gal) settled on a new-wavish hue that's wasn't overfilled with dominating snyths, or dominating anything for that matter, save for some par excellence melodies.  While certainly a tangible product of their era, M/P were hardly slaves thereof.  Some highlights?  "Canada" is laden with a veritable bouquet of clever, praiseworthy couplets about are allies to the north, and packs a pulsating rhythmic aplomb to boot.  The "my fave" award goes to the next track in, the Julie Holland-sung "Hologram," which is as they say, undeniably catchy. 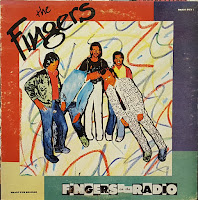 Not to confused with another band of the same moniker I featured some years ago, these forty digits belonged to a quartet with a Coronado, CA correspondence address.  The Fingers are something of a nightmare when it comes to relevant search engine queries, but an utter dream come true for aficionados of power pop's golden era, circa late '70s/early '80s. Golden throat Joey Harris bears an inflection strikingly akin to that of Elvis Costello, but his cohorts are considerably more subtle in tact.  "Too Young" is worth the price of admission alone, boasting warm reverb and pristine chorus harmonies to die for, with the rest of the record following in close pursuit.  Devastating. 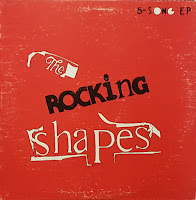 This one is so killer, Devo stole it's title for their lackluster 1984 album.  I introduced you to Rocking Shapes in 2014, by way of a subsequent, proto-indie rock single that I dug just as much as this five-song ep, which is sadly the closest this Lafayette, LA troupe would come to issuing an album. The rather off-kilter, homegrown record sleeve to your left is slyly reflective of the Shapes sonic palette, who seemed to have one foot steeped in Television and the Dream Syndicate, while forecasting '80s off-the-radar scenesters like the Libertines and Pedaljets.  This blurb alone surely can't convey what I'm feebly attempting to illustrate, so I hereby invite you to draw your own conclusions.  Enjoy (you will).

Joey Harris of The Fingers is, I have to assume, the same Joey Harris who went on to the late lamented Beat Farmers...

Thanks. Had no idea. You might say he went onto bigger, but not necessarily better things. Never was down with the Beat Farmers.

Thanks for the review of Macchu Picchu's EP!
I was the principle songwriter (as well as guitarist and keyboardist) in that band.
It's a shame there's not more audio documents of the band, as it was pretty unique, fitting firmly in the 80s techno pop puzzle, yet having all sorts of outside influences that made it not fit so snug when viewed closely. We tried to keep a balance between new wave sensibilities relevant at the time and a sincere artistic stance.
Julie was a fantastic vocalist and she became a fantastic doctor (where are they now?) who you may have seen as an on air expert on numerous news shows.
https://www.amazon.com/Julie-Holland-M.D./e/B002G5S71Q

I continue to serve the muse. You can peruse a good sampling of my music on youtube...
https://www.youtube.com/playlist?list=PLRbVVRaLeliYuKpPIkh10OX3MX3fLX2zO

Thanks again for this trip down memory lane and for the great blog!
Kudos!
Ben New