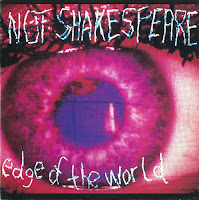 Not Shakespeare's self titled 1986 ep blew me AWAY...when I heard it for the first time almost twenty-five years later.  Yep, another one who made his way to the party a quarter century after the fact, though given the strength of the four songs on that record late was way more preferable than never.  And I didn't even realize there was a follow-up full length that existed until I stumbled upon it in a used music shop just a couple years back.  By 1992, this Blacksburg, VA quartet traded in some of their collegiate indie rock luster for more streamlined pastures while still retaining more than a modicum of earthy jangle.  It's pretty evident that Roger McGuinn cast a spell on these gents, and I'd almost swear N/S adopted a thing or two from late-80s R.E.M., the Pedaljets and Dreams So Real.  Edge of the World boasts an Americana tincture in places, which might take some getting used to for those of you whom only know them by that stunning aforementioned ep.  I can do without some of this disk's more long-winded ambling numbers, but pearls like "An Age Like This" and "Sister" compensate perfectly.

Not bad, but maybe I'm being a little too snarky in thinking that they should have called themselves Not Trip Shakespeare.

That would have worked too.

"Stone" is an outstanding song, in my opinion. Thanks for sharing and please forgive my english.

File not found on this server. Could you please re-upload the file. Would love to hear this album. Thank You!

Thank You so much for being kind enough to upload the file. Best Wishes to you, Richard.

Reup Please if possible. Many Thanks

Can you please reupload this?