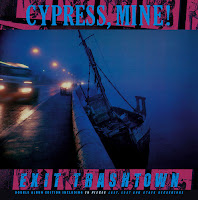 For every successful upstart in the British isles (circa mid-80s) that extricated themselves from the frenetic, indie-pop cocoon to mainstream acceptance (e.g. The Smiths, Housemartins, Primal Scream) there were scores of others who barely breached the confines of the teaming lower rungs, as it were.  Now the subject of anthologies, reissues and even box sets, the sub-rosa Brit pop scene is coming to light, and it's a great time for those of us who were absent for that small-scale Thatcher-era eruption to catch up - even if it's been a solid three decades after the fact.

Problem was, for Cypress, Mine!, they weren't really part and parcel of the "scene," if only by the arbitrary circumstances of location.  Being somewhat cut off in their native Cork, Ireland, I have a hunch this pre-web quartet weren't exactly hounded by the likes of NME and Melody Maker.  Nonetheless, that didn't prevent C/M from absorbing a healthy dollop of their equally inspired contemporaries - Orange Juice, Bodines, June Brides, and perhaps even a small contingent of the Flying Nun Records roster as well.  Exit Trashtown, a recently issued double LP compendium of Cypress' lone 1987 album of the same name, along with singles and unreleased goodies, makes the case that these gents deserved a far more successful fate.

For established customers of any of my aforementioned references, Cypress, Mine may not exactly wave the banner of innovation.  In an era when oodles of like-minded hopefuls were playing the field, they very well might have been squeezed out by other jangly colleagues who were desperately competing for a piece of John Peel's coveted attention and airtime.  Despite the flooded marketplace C/M were in fact something of a revelation if only in terms of sprite and lovingly wry songs.  The smart yet pensive romantic observations raised on "Justine" and the brisk "Phone Call From Heaven" are tethered to a sonic penchant that would have fit like a glove on the now legendary C86 compilation.  Even more exciting than the Trashtown album material proper, the (mostly) previously unreleased In Pieces quotient of this reissue reveals that C/M were headed in an even bolder direction on the guitar-sy "Crawl," the driving "These Days," and the spry, left-of-the-dial bent of "Sounds Like Rain."

There's a trove of magnificent, and tragically almost lost music to feast on here, but don't take my word for it, preview Exit Trashtown on Bandcamp where you can purchase a digital version, or spring for the 2xLP import version, which is your best option for epitomizing the very sweet album sleeve.  You can also buy a physical copy from Pretty Olivia Records Big Cartel page.
Posted by spavid at 8:35 PM