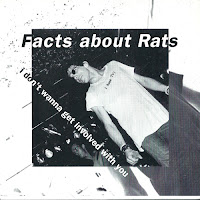 "Nirvana's boring...Seattle's mainstream...What's a band to do???  Do what comes naturally!"

Or so goes the introductory blurb of the bio that accompanied my copy of Facts About Rats' 7," a veritable quarter-century old relic at this point.  The Rats comprised five guys from Beantown, who do in fact exude punk rock in relatively natural fashion.  But that's really not that remarkable of a revelation given that mic fiend Bobby Gaudeau performed a stint in the Queers, and even takes one of their songs to task on the a-side of this wax.  A Ramones-y stride is more than evident on this triple threat 45, and coincidentally or not, the Rats wouldn't sound out of place on a bill with another one of their contemporaries, the Action Swingers.  A ballsy, no-nonsense tact ensured these dudes would never be mistaken for any of the generic, left-coast fluff that was all too prevalent at this time.  A very solid 7," and apparently the only recorded document by the Rats that was ever in any kind of circulation.  They also contributed a track to the hardcore comp Apocalyptic Convulsions, which I'm also including in this download.  A mere four song discography you might ask?  This appears to be the case, but I'll take that over nothin' any day.

A. I Don't Wanna Get Involved With You
B1. Never Let You Go
B2. Go Away

plus: Still Want You (from Apocalyptic Convulsions comp, 1992)