Witnessing the video for Hüsker Dü's "Makes No Sense At All"/"Love is All Around" on 120 Minutes in the fall of 1989, was the most visceral four-minute sales pitch I encountered in my entire life.  Maybe it didn't alter the ground I was standing on, so to speak, but it placed me on an exciting new trajectory that would lead to the discovery of literally hundreds of other artists with similar ideals and templates, not to mention the universe of indie rock in general.  Indirectly, my acquaintanceship with Bob Mould, Grant Hart and Greg Norton led to personal friendships, and even got me into the tape trading thing (remember that?).  Yes, that one fateful video (which from my vantage point might as well have been filmed on a home camcorder) made ripples that sill reverberate to this day.  "Who were these guys?" I thought to myself at the time.  Why the hell were they wearing street clothes?  SST Records?  Never heard of them.  And for God's sake, I thought Flying V Gibsons were exclusively the province of hair farmers like Poison. 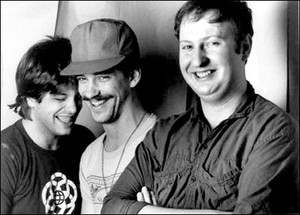 Being stuck in a small town in the '80s and early '90s finding indie titles invariably entailed mail-ordering.  So, while I was patiently awaiting a clutch of Hüsker tapes and records from SST, I investigated their Warner Bros releases, beginning with the sprawling Warehouse: Songs and Stories double album.  It may not have had quite the same velocity as say, Metal Circus, but I was bowled over nonetheless with the band's dual delivery system of profound melodic structures and unyielding swift tempos (that of course, ebbed appropriately on ballads like "No Reservations").  In 1990 I accumulated their catalog in short order, and absorbed it meticulously, song-by-song.  And in that very same year I was even treated to Bob Mould's subdued Workbook.  Around this time I put my feelers out there for any other Dü-rights like myself, and fortunately I wasn't alone in the world.
debut solo record,

Despite their breakup, not much earlier than my discovery of them they would soon become my go-to band of choice.  To paraphrase the great Michael Azerrad in his tome Our Band Could Be Your Life, Hüsker Dü were the kind of band you could hang your hat on.  Not so much in terms of political philosophy mind you, but the little trio from Minneapolis that could spouted a wellspring of truisms and empathetic sentiments on matters ranging from romance to society.  And the tangled latticework of feedback, hooks and then some which accompanied it was nothing short of flabbergasting.  While not always adequately acknowledged during their existence, the group has been canonized and immensely revered post their early-1988 breakup.

Ironically, 2017 turned out to be one of Hüsker Dü's most relevant years ever, even if all three participants hadn't been in the same room together for a solid three decades.  Tragically, and surprisingly to many fans, drummer/mouthpiece/co-songwriter Grant Hart passed away from cancer on September 13.  And roughly two months thereafter saw the arrival of Savage Young Du, an artfully and painstakingly crafted multi-disk box set featured mostly unreleased archival live and studio material culled from the earliest years of their tenure.  A remastered version of their first studio full length, Everything Falls Apart was also included. 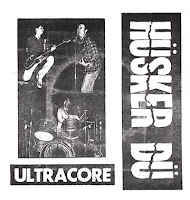 Over the course of the first two nights of Chanukah, I'm going to feature a slim archival trove of my own.  The bulk of the first installment concerns two complete live sets.  Hüsker Dü's December 28, 1982 performance in Tuscon, AZ was thoughtfully captured on tape, and bootlegged multiple times under the moniker of Ultracore.  This rip wasn't taken from that often shady sounding piece of wax, rather another source tape.  The gig in question finds the fab three on the threshold of a more melodic modus operandi, while still keeping the breakneck thrust of their nascent years intact.  The crowd is treated to numerous songs from the then-forthcoming and soon-to-be seminal ep Metal Circus.  An absolute and utter scorcher.

I've never attended a Hüsker Dü (nor will I) but I'm convinced they never gave a poor performance, save for any external circumstances beyond their control.  By the time of this May 1985 gig in Toronto, the band was at the apex of their playing and songwriting aptitude, having paid their dues at pretty much every notable punk squat/dive in the country.  They were on the verge of graduating to larger venues, not to mention a considerably more sizable record label.  I would peg this show as having occurred between the New Day Rising and Flip Your Wig records, as the setlist draws heavily from both.  This is logical given Hüsker Dü's notorious penchant for previewing future album material in concert.  Audio quality is a little too bass-y for my tastes, but overall an above satisfactory audience tape at the height of their creative peak.

I'm including a third "mystery" file, that you'll just have to download to reveal its nature. Cool?  Thought so.  Tune in tomorrow evening for the second tranche of Hüsker goodies.  Links and tracklists are as follows.

Well done. Was blessed to see them in May 1986; to this day one of the loudest and most ferocious shows I've attended.

Thanks so much for all the Husker songs!