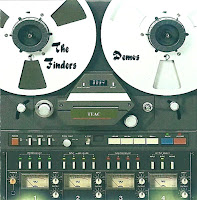 They never were the pinnacle of the power pop heap, nor were they praised by the hipster cognoscenti of their era, but San Fran's Finders had the chops and songs to warrant a seat at the big boys table.  Of course, a discography limited to a couple of locally released singles in the pre-internet era didn't exactly behoove this foursome in regards to publicity and such.  Nonetheless, the last ten years have witnessed some bona fide canonizing of the Finders oeuvre, with a pair of retrospectives, including the Finders Keepers collection.  With a sound vaguely recalling early Plimsouls, and perhaps a gutsier Raspberries, they were off to a decent, if not particularly innovative start.  And you can experience that "start" for yourselves with this (presumably) band sanctioned set of four-track demos tracked in 1980.  Lo-fidelity is the watchword here, featuring an albums worth of raw, analog-soaked tunes including their signature piece "Calling Dr. Howard," as well as assertive keepers like "Don't Let It" and "Standin' in the Rain."

Hello!
My blog With The Song Of Life
My address is http://forwardwiththesong.blogspot.com/
Please add to the blog list.

Very sorry to hear this. Thanks Diego.