I thought this would be an appropriate follow-up to last nights Cheap Trick indulgence.  Let's see.  I don't think I've talked up Off Broadway (USA) before on here, but like Trick, they also hailed from the environs of Chicago, and like it or not, were lumped in the power pop ghetto. 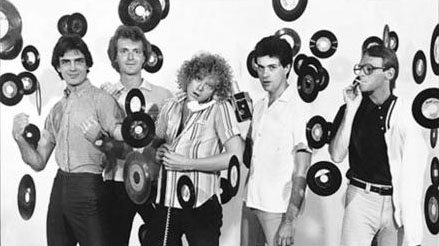 Like contemporaries Shoes, Off Broadway were airtight and economical, but throaty frontman Cliff Johnson lent the band a sturdy, muscular forte.  The quintet's linear but groove-savvy attack was perfectly evidenced on their debut, 1979's On, featuring a bevy of dynamite signature pieces like "Bad Indication," "Stay in Time," and "Full Moon Turn My Head Around."  On's wall-to-wall cavalcade of hooks was so potent it may as well have been a greatest hits album unto itself, and in another years time they delivered another knockout, Quick Turns.  Collectively, neither album generated a Top-40 entry, although "Stay in Time" did respectfully on regional radio outlets.  By 1983 it was over.

Short of sharing those two albums (were have been made available again) I at the very least have a couple of less common items, or quite frankly, bootlegs.  First is a live performance cut in-studio for WIBA, a Madison, WI FM station in May of '80.  A small but appreciative crowd is present for fourteen right and tight tracks, including a preview of several songs that would comprise the Quick Turns LP.  You won't find much deviation between O/B's live and studio delivery of their repertoire, but Johnson's inter-song banter is amusing.

Next up is a collection of studio tracks I have insufficient amount of pertinent info on, but from what I'm able to glean it's material that was intended for a third studio record, circa 1983.  The first half of these tunes were largely in keeping with the vibe of On and Turns, while the rest varies.  I can only offer these in a relatively meager birate.  Apologies in advance.  Ironically, Off Broadway reunited in the mid '90s for a proper studio record, Fallin' In, though the songs here don't overlap.  Enjoy.

Oh man... now THIS is a Christmas - sorry, Hannukah - present for the ages. I have become a connoisseur of these semi-power pop 70s/80s bands, and Off Broadway is one of the best. Thanks so much for this. I can't wait to see what's to come in the days ahead!

On Broadway is a good example of a band that had regional success. There's probably an entire book that can be written about bands who were quite good in the America of the late 70's/early 80's...there's probably some relationship between their base of operations combined with the expansive American geography. There is only so far that you could drive in a van, some circle of about 800 miles that limited how far you could go with out serious money backing you from a record company.

Out here, in the Bay Area, we had bands like Earth Quake, Eddie & the Tide, etc., who were great bands but never had the wherewithal to break out nationally. Down south you had guys like Grinderswitch... the Good Rats out in the New York area... they didn't have the backing that allowed them to break out nationally. But every rocker in their metropolitan area knew them!

I have some memory that these guys were connected with (the?) Pezband, another great unappreciated group out of Chicago...does anyone know if there was a connection???

One of my all time fav bands. Being from the Chicago area i saw them live many many times. Thanks!!

Any band that gets legitimate comparisons with Shoes is a-ok with me! Thanks so much!

Thanks folks, you are much too kind. Here's an article that goes into the Pezband/Off Broadway connection:

Thanks for the link to the article; that clarified the relationship of the two bands. I had the first two Pezband LPs and their two EPs...and bought the Japanese reissues of all three albums on CD a few years back. Great stuff!

Wow, nice to hear the unreleased stuff, thank you!

My uncle was the bass player for Off Broadway and yes there was definitely a connection between Pezband and Off Broadway (USA). Also check out the group The Kind, they were all premier Chicago power-pop and the members were all interconnected.

Spavid, is there any way I could get a copy of both of those off broadway songs that you posted? I would gladly pay for them. the link isnt valid anymore. email address is thejroget@gmail.com

I absolutely LOVE Off Broadway ... I was in my early teen years, like 13 years old, when I started hearing them on the radio, and I've been a fan since - I'm in my 50s now.