Hope you're enjoying a happy and heart second night of the festival of lights.  Last night we partook in a couple of primo Hüsker concerts, shrouding ourselves in the full bore roar of Minneapolis unlikely geniuses.  Now it's time to cut a beeline to the studio...and believe it or not, the phone lines.

Chances are Bob, Grant and Greg partook in scores of phone and live-to-air left-of-the-radio station interviews, but the number of which that were captured on tape from those keeping score at home may only number in the low dozens, if that.  Submitted for your approval are two fairly complete exchanges, which to a certain extent may not count as fully representative considering Bob was the only party involved.   The briefer of these two conversations, the May '85 WREK interview is probably ranks as merely good, where as the one conducted with Minneapolis community outlet, KFAI is far more insightful.  There are two reasons for this.  First, Bob himself fields a bevy of unscreened questions from locally call-in listeners.  Secondly, in this comparatively docile context, you get a better understanding of the man himself who is extricated from the stage and his trio's attendant concussive maelstrom.  No egos or airs in the least on his end, and he even engages the DJ regarding his affinity for professional wrestling.  In the interview portion of the download, you'll also find a Bob Mould soundcheck, which was contributed to Vol. 10 of the Tellus cassette zine, circa 1985.  Today, we would likely refer to such an endeavor as a podcast, but I digress. 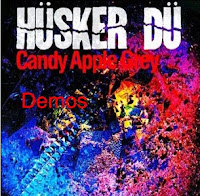 Next up, the demos for H/D's major label debut Candy Apple Grey may not exude any out-and-out revelations, but anything unreleased by these guys, even if they are just in-progress incarnations, will no doubt fascinate die-hard acolytes.  Many tracks appear in rough, instrumental sketches, whereas "Don't Want to Know if You Are Lonely" and "Dead Set on Destruction" are reasonable blueprints for what would become the finished versions.  We're even treated to some thoroughly unreleased cuts that never made it past the demo stage - "Misty Modern Days" and "Just Be," which granted, are instrumentals - but that latter one kinda cranks. 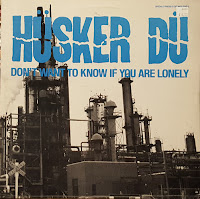 And finally, I've cobbled together the vast majority of Hüsker Dü's Warner Bros era flipsides.  Like it or not, every band has 'em, and if anything else the band knew what songs to prioritize for the album.  Unbeknownst to a lot of fans, the band would occasionally preform acoustic, and we're treated to live, stripped down takes of the typically shredding "Celebrated Summer" and "Flexible Flyer," from a 1986 Hollywood Roxy show.  "Fattie" is an imposing, Metal Machine Music style piece, the lengthy and underwritten "All Work and No Play" is a strangely alluring slice of naval-gazing rock, while the sprite basher, "Everytime" features the lead vocals of none other than bassist Greg Norton!

A big round of applause goes out to any and all of you that hooked me up with much of this material, in some cases decades ago.  And on behalf of a grateful nation, let's all thank the original three architects of these wondrous and timeless songs.  R.I.P. Grant Hart.

I'm very happy to see even more rare HD here. "Makes No Sense At All" was also my introduction to the band, back when "Flip Your Wig" came out, and that album became my first HD purchase.

On a sadder note, I suppose you've seen the news that broke today about Pat DiNizio. Like Tommy Keene, he left this world much too soon. I really appreciated the Mega gift you gave us during the holiday season many years ago, and if I didn't leave a message about it at the time, I'll make sure and say THANKS for it now.

You're welcome Eric. Yes, I know about Pat. As a matter of fact, shortly after I did that Smithereens mega-post, Pat emailed me and politely requested I take it down. Apparently he put that stuff out there without the consent of his other bandmates, and regarded it as a mistake on his part. That man lived quite a full and charmed life. We should all be so lucky.

Thank you . You are so awesome!

Thanks for the hüsker dü items.