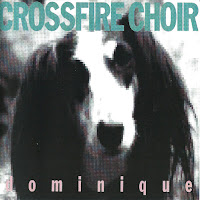 The Crossfire Choir circle is now complete, with the addition of their third and final album on these pages.  I mentioned when I launched their first album a few weeks ago that C/C seemed to gain credibility as their tenure progressed, but as it turns out that metamorphosis wasn't as pronounced as I initially thought.  Nonetheless, out of their trifecta of platters, Dominique is probably the most recommendable.  Perhaps the most interesting development is that the album was released by CBGB's in-house record label.  I'm not sure what Hilly Kristal saw in these lads, as they don't bear much of a punk pedigree, but something tells me Crossfire Choir must have gone off like a firecracker in that noted and now defunct lower Manhattan venue.  Now that I think about it, there are some pretty choice aggro numbers here like "I Know You Are" and "Can of Worms" which kick up more than their fair share of dust.  Elsewhere, C/C's prowess on Dominique is a little more tuneful and straitlaced with "If This is a Joke" and "Showdown" hovering in the vicinity of the Smithereens and Dreams so Real.  Not a bad place to be I suppose.  There's oodles of songs here - almost a double album's worth, so dive in and have at it.

OK....thanks! But I await your annual Hannukah gifts with great anticipation!

Thank you Spavid soo much for complete collection of Crossfire Choir!!!

Thanks for remembering us!
Jay Pounders
Singer/Songwriter for Crossfire Choir
Jpounders.com