The Square Root of Now - Bent Around Corners (1987, Parallax) 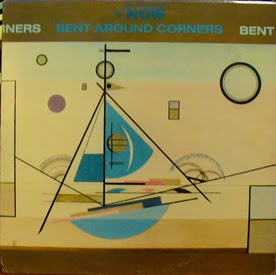 Ok, I might be cheating a bit with this one.  Technically, I posted this album way back in 2010.  It was my own vinyl rip, and I opted to remove it a few months later when I learned someone involved with SRoN was selling CD-Rs of a remastered version of it.  Since it's no longer for sale, I'm making it available again in it's remastered iteration - and this time I have more to say about it.

I purchased The Square Root of Now's Bent Around Corners based on it's eye-cathching, Kandinsky-esque cover art, but truthfully the rather oblique song titles adorning the back of the sleeve piqued my curiosity further.   Bent...turned out to be a surreal and sublime re-imagining of new romantic synth pop, the mainstream variation of which was already starting to taste pitifully stale and formulaic.  The record's three architects, frontman Dan DeWeese, bassist and keyboardist Fritz Martin, and drummer Chris Hall took full advantage of the state-of-the-art recording apparatus of the day, without submerging themselves (or their audience) in anything too gaudy or gratuitous.  The mystique exuded in the record's eleven songs aren't merely attributed to their esoteric nomenclature (albeit "If Motif; Why Wagon" and "Honndakanaya" are reflective of just that) rather there's a prevailing sonic aptitude that screams "exotic" pretty much anywhere the stylus falls on Bent Around Corners.  Martin's fret-less bass is a huge part of the equation (pun intended), and is every bit as sensual as the band's more traditional implements.

The production here is nothing short of plush and resonant, particularly when DeWeese waxes romantic on blissed-out ballads like "Compile Your Love" and "After the Rain."  In my original write-up I posited you could draw parallels between Square Root and relative contemporaries The Three O'clock and Glass Moon.  That observation holds true, particularly on the beaming opener, "Between the Light," which wouldn't sound too out of place on the Three's Arrive Without Traveling LP, also from '87.  Bent... concludes with a strapping finale in the guise of the title cut which crescendos to multiple hooks and sumptuous highs, leaving anyone within in earshot to wonder what a second SRoN album would have amounted to.  Regrettably, this was their first and final lap.

It's a bit hard to believe that music this weird, wonderful, and frankly other-worldy emanated from the unlikely locale of Jackson, Mississippi.  Ultimately, it's that dichotomy which makes Bent Around Corners even more of the singular and revealing treasure it is.  Sad to say, DeWeese passed away in 1999 from natural causes.  More can be read on him and Square Root on Facebook.  A huge debt of gratitude goes to Chris for setting me up with these files.

If anyone is interested in a FLAC version of Bent... let me know.  I'll try to make it available at some point.

would definitely like to get a FLAC version if possible, thanks

Will do my best in the next few days. Thanks for your interest.

Wonderful piece Neal. Dan and The SRON are long gone, but the music can still live thanks to you. I am eternally grateful.