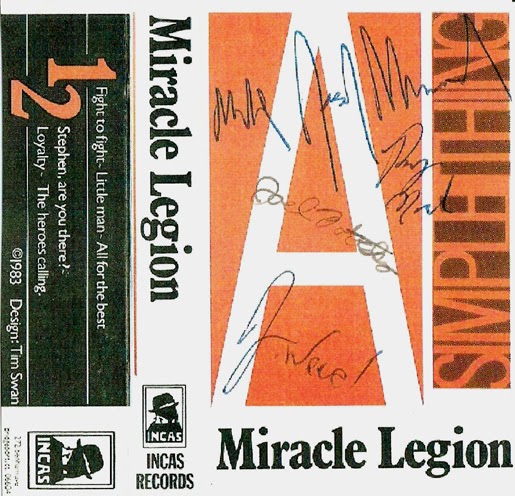 Behold.  The holy grail of Miracle Legion recordings!  For many years I only knew of the existence of the Simple Thing cassette/demo by virtue of it's mention in ML's entry in the Trouser Press Record Guide.  Granted, I'm making this a Chanukah offering, I know pretty darn well that this nugget won't qualify as particularly special or revelatory to the better part of you reading this.  So what's the big deal?  In a nutshell, I'm a mondo fan of Miracle Legions first two records, namely their 1984 debut ep, The Backyard, and their first full length, Surprise, Surprise, Surprise which arrived three years later.  Both are quintessential strum and jangle college radio staples that warranted a CD reissue decades ago (hint, hint Omnivore, Captured Tracks?)  No muss, no fuss.  Just effortlessly great pop tunes...that for better or worse received way too many comparisons to R.E.M., but I digress.

I don't own an original copy of Simple Thing, but I befriended someone who does.  Those of you acquainted with this fine Connecticut export may recognize a few songs by name ("All For the Best," "Little Man," etc) but will discover that these much rawer, nascent arrangements sound foreign by comparison to the incarnations that wound up on proper ML records.  The scintillating "Fight to Fight" is steeped in austere, jagged post-punk, and provides ample evidence that the band absorbed an earful of the first three U2 albums.  Ditto for the equally appealing "Stephen, Are You There."  Other selections aren't as compelling but are nonetheless cut from the same foreboding fabric.  When all is said and done, Simple Thing, paints a rough, and dare I say amateurish portrait of a band with a couple of really hot ideas, and lots of fine tuning ahead of them that would really pay off in the end.  A big round of applause to MT for setting me up with everything.  As obscurities go, this is inexplicably rare.

An argument can be made for the Trouser Press Record Guide in its various editions being one of the most important book publications in the history of the world. Not a "good" argument, but an argument nonetheless, and one that actually fits with how my world evolved.

I don't think I understand this file.

Is is just one song? The whole tape on one file?

Kind of strange, 1 file, 4m46s, that seems to contain, as far as I can make out from titles, the 1st 3 songs, before cutting out?

Nice one. Couple of other Miracle Legion live shows are here at my blog:

I'll look into the file issue as soon as I can. Check the comments again tomorrow for an update. Sorry about this!

I just updated the links. Downloaded the MP3 version and it opened perfectly. Please advise if you're still having an issue.

FLAC is fine too. Thanks for fixing (& uploading).

Chanukah Lives! Thanks so much.

thanks much! first time i saw ML was in the summer of '86. not long after "The Backyard" came out, at TT The Bears in Cambridge, MA...i remember there was a hurricane supposed to be hitting the coast, so NOBODY was in town, and the fellas played to a not very large crowd, but i dug them, and talked with Mark and Ray afterward...nice guys, if a bit shy....looking forward to hearing this!!

Been looking for this for a long time. Thank you for the upload

I too would be very grateful for a re-up!

This is now up as an official digital release over at Mezzotint. Support the Artist! https://miraclelegion.bandcamp.com/album/a-simple-thing