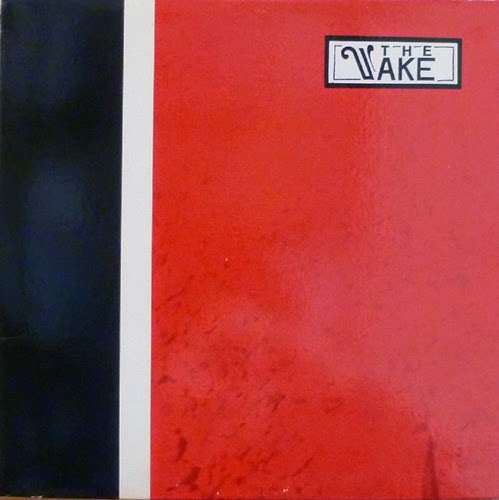 If imitation truly is the sincerest form of flattery. R.E.M. should have been tickled pink, assuming they ever heard this obscuro L.A. bunch.  Just as the Beatles inspired untold hundreds if not thousands of wannabees to follow their legendary lead, Athens, GA's own fab four had more than a pronounced effect on impressionable collegiate dudes who might have otherwise still been mired in Ramones riffs were it not for incendiary missives like Murmur and Chronic Town.

Given a highly ubiquitous moniker, common last names, and their existence a solid decade before most of us had our hands on PCs, querying anything relevant regarding this L.A. based five-piece is an exercise in utter futility.  Yes, The Wake were undeniable acolytes of R.E.M., with a mouthpiece in Michael Horton who bore more than a faint resemblance to Michael Stipe.  Guitarist and songsmith Todd Larsen isn't the second coming of Peter Buck, but the aesthetic is present on the brisk and strident "Lion's Heart" and more so on the arpeggio laden "The Crystal Mile."  The record's comparative 'ballad,' "Forever Fair" wields a charm of it's own even if it's considerably meager to what Stipe & Co. could have done with it were it their own concoction.  Throughout The Wake, Larsen's prose is gently enlightened and pretension never bests him.  The Wake's formula was a simple yet effective one, something of an antithesis to all the Paisley Underground hoopla that was transpiring in the quintet's own backyard.
Despite the concluding "Flaming Crown" striking me as a bit of a slouch, this ep ranks as one of my best retro discoveries of the year.

This one sounds like it's right in my sweet spot. Way, way back before the commercial Internet I had an idea for a cassette mix of REM-inspired recordings that I was going to call "Another Jangly Mess" (stolen from Bobby Sutliff). Never did it, but thanks in large part to this site I would now have many, many songs to choose from.

From one play I think it's pretty good -- and your offerings that hit with me tend to get better with age.

Bruce, my friend, sometimes it appears you're my only customer. At least you're a satisfied one.

Yeah, I'm sure I could make a mix tape like the one you described. Maybe I'll do one for the site (just don't hold me to that).

Thanks so much for all the great stuff. Any chance of re-uploading "Nightman - No Escape"?

Could you re-up this one please? Thank You!