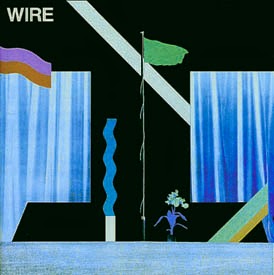 Practice makes perfect (pun partially intended).   I started Chanukah on a post-punk note, so I thought I'd conclude on one as well.  A good many of you got a charge out of the Wire 154-era rehearsals I put up in 2013.  Shortly thereafter I found this set floating around, which doesn't appear to have an official title, though it's been referred to as "Graham's tape" or "Graham's practice tape" - the Graham of course being bassist/mouthpiece Lewis Graham.  Wire made it onto my sonar around the time they were opening for Depeche Mode back in 1988.  A Bell is a Cup... was my first album by them, not Pink Flag.  Needless to say I studied their back catalog in short order and found it to be a near-mind blowing revelation.  Wire may have been part of the so-called "Class of '77," but they would have no part in staying tethered to the three-chord, socio/political ethos of that era which ironically became revered for it's all too stifling petulance.  To the contrary, Wire were coming from a place of genuine nonconformity.  If you're already a convert I'm merely parroting back what you already know, so I'll cut the line here.

Amazingly, there's little material here that overlaps with Wire's officially released demos compendium, Behind the Curtain (which covers exactly the same era), and ditto for the popular Not About to Die bootleg.  Perhaps why these tracks haven't been officially released is that most of them sound negligibly different from the finished versions.  In fact, in certain portions the only apparent difference is Colin Newman's vocal takes.  Nonetheless, us Wire aficionados are pretty damn anal, and even the slightest deviations can cork our heads a good ninety degrees.  I credit these as Pink Flag and Chairs Missing demos, but 154's "40 Versions" appears in this collection, and the three concluding cuts are full fledged outtakes - just don't get your hopes too high for those.  All in all, it's quite a feast.  Enjoy.

I'm not as enamored of this band as people who know my general taste in music would expect me to be, BUT holy smoly can't want to check this out.

Thanks!
Have a happy Holiday Season!!

Looks like this is a hit. Have a righteous holiday season peeps!

Thanks for sharing this list of great christian rock bands here. I am a big time lover of music and always admire new talent. Now this band is at top of my favorite list.

Might be the best single line to describe the mind of a the music geek mindset. Brilliant. Wish I wrote it. Might have to lift it. ;-P

I was a 15 yr old music geek in '77, already deeply enthralled and drowning my passion to track down UK punk singles throughout the year so I picked up "Pink Flag" when it came out(and the next two subsequent albums), over come with anticipation when it was put on.

It - and the other two albums, whose distinct and evolutionary in the forward reaching angst are equal and different pillars of strength as the debut - was/is/will ever more be transformative.

I bought the absolutely gorgeous box sets that came out a few years ago to revel in my 4th-time purchase of the trio(I'm up for a fifth!).

Hearing these and the other boots mentioned are exactly as you say...the mouth dropped, cork of the head of ever-so-slight change or modification from the hard wired hard drive recollection of these tunes is...EXACTLY the point.

My first exposure to Dada-ism and the transcendence of shards of simplicity in music(well, there is the Ramones first two albums in this year and, oh yeah, "Damned, Damned, Damned" but that was December, 1976 if I recall correctly).

I will forever be thankful to this gang of four.