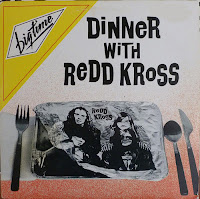 Here it is, the grand finale of Chanukah week, but for better or worse, the emphasis on this post is more on words than music (but there's some of that too).   The topic of my last Redd Kross entry (demos for Third Eye) was "compromised" so to speak by the powers that be, so you probably don't want to sleep on these.  Dinner With Redd Kross was a promotional record issued in conjunction with the band's excellent 1987 platter, Neurotica.  The interrogation took place at WBCN in Boston and was conducted by Albert O.  As you might guess, the usual band backstory questions were fielded to the McDonald Bros, but the responses are peppered with plenty of embellishment and "insider" celebrity secrets.  Entertaining for sure, but be forewarned, there are oodles of pops and snaps that I didn't have an adequate amount of time to edit, at least not completely.  The interview disk was also paired with another record featuring a remix of "Play My Song."   Speaking of tunes, are there any intermingled with the interview?  I dunno.  Can't never tell.  On second thought, maybe you can by investigating below.  BTW, if you don't have Neurotica, it was reissued/remastered in 2002 with two bonus tracks, and you can get it from Amazon and iTunes. 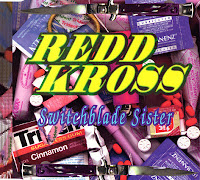 And as a bonus gift, in a separate download link you can check out Redd Kross' long out of print Switchblade Sister ep, which dropped in 1993, the same year as their Phaseshifter album.

I've been looking for a rip of Dinner With Redd Kross for a very long time!

big big thanks for your chanukah special!!!!!!

Appreciate the gifts. I found something interesting about all of them. I'm especially happy to have the RK ep, the Dentists, and O Positive. I own CDs by all of them but have never heard these, so you filled in a lot of missing pieces with these posts. Thanks.

Thanks folks. Happy to hear I made your Chanukah.

holy motherlode batman! thanks for this post of my fav band with stuff i never knew existed.

hello! very excited to hear these uploads, but the links have expired. can you reup? thank you!

Love the Switchblade Sister EP. Seems there are a couple of versions, one with 3 tracks and another with 5. One of those may be Euro or Canadian. I also have the red (redd) vinyl 45 with the nsfw cover and it's a great little record.

Hi ! These should definitely be included on the next batch of re-ups, the Switchblade Sister EP is fantastic. Cheers.