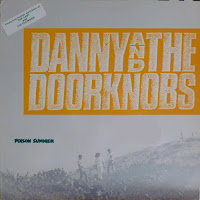 The circumstances and various configurations of this album are a bit confusing, but before delving into that, Danny and the Doorknobs were a spinoff group from two justifiably revered L.A. bands from the early '80s - The Last and 100 Flowers (the latter descended from the scum/minimalist hardcore act The Urinals).  Not bad as far as lineage is concerned.  Shortly after this record was issued, D&tD evolved into the more renown Trotsky Icepick.  With me so far?  In 1983 the first incarnation of the Poison Summer album was recorded under the Danny banner, but wasn't released until 1985.  That version is the one I'm presenting here.  With that straightened out, once Trotsky Icepick were signed to SST Records, they decided to reissue an alternate version of the album in 1989 with a remixed, reshuffled track list that also featured outtakes from the original '83 session.  It also bore an amended title: Trotsky Icepick Presents Danny and the Doorknobs in 'Poison Summer'  I haven't come across hide nor hair of it, but from what little I've been able to glean, the album jacket is pretty frivolous.

On top of that, one year before the reissue, Trotsky trotted out yet another LP brandishing the Poison Summer title, but this was a completely unrelated record than the one(s) I detailed above.  Here is what the ever reliable Trouser Press Record guide had to opine about each of them:

Recorded two years prior to its 1985 release, Danny and the Doorknobs' clear-vinyl Poison Summer is a neat little pop record — underproduced and haphazard, perhaps, but sprinkled with good songs (like the title track) and skillfully varied arrangements. (Granted a more explanatory title, this debut was later overhauled — replacing several tracks with vintage outtakes — remixed and reissued in an inferior sleeve as Trotsky Icepick Presents Danny and the Doorknobs in 'Poison Summer'.)

The second Poison Summer, an entirely different 1986 LP credited from the get-go to Trotsky Icepick, was recorded as a quartet in which the arrival of a keyboardist allowed Mataré to concentrate on guitar. Harmony vocals and improvements on every front — studio sound, twin-guitar arrangements, melodies, lyrics — make the LP a treat, a crisply uncommercial demonstration of unstylized pop with intelligently offbeat lyrics.

My thoughts are as follows.  Poison Summer is an offbeat, non-deliberate pop album, with obscure appeal that falls a few notches shy of "avant" territory.  Textured, subtle, and occasionally contemplative, it's minor key aesthetics are engaging, that is if you're willing to invest a few concerted spins.  Throughout I detect negligibly faint traces of Volcano Suns, Japan, Wire, Pylon, Monochrome Set, and early REM, but your results are sure to vary, and likely to be way off course from mine.  For more insight into Poison Summer, check out this piece over at Lost In Tyme blog.

i have the Trotsky Icepick version if you would like it...

If you have any of The Last discs I would be interested to hear them again.

I also have both of the other versions of Poisin Summer in digital form if you want them.

It was confusing then and I still don't know why they did that with the title. That said I was a big fan of Trotsky Icepick's Baby and El Kabong disks.

I did a query on Amazon, and was able to find the reissued version, and a copy is on the way. I think I really need to investigate Trotsky a little more.

Michael, are you still doing your blog?

For anyone still interested, the reason for the album title confusion is that when they started the band as Danny and the Doorknobs around '83, their stated intention (being the art-damaged geeks they were) was to have a different band name for every release while retaining the the same TITLE for each different album. After they got to the second band name, Trotsky Icepick, the ridiculousness of this idea set in and they converted to regular namimg conventions. They reissued the first one later once Trotsky were established and attemped to differentiate the album with new art and track listing. Incidentally, they are midway through recording a brand new album for 2013, with the classic late 80s line-up.

Hi
It has been some time since I visited website with such high quality information about regarding . Thank you so much for providing such helpful informationart deco door knobs

Greetings, Spavid!
If there is any way you might be able to re-up this lp, I would be beyond grateful. Beyond. Thus lp is not available elsewhere onweb, not on slsk, not anywhere but here.

Thank you for everything, always -