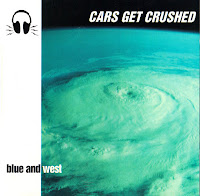 I've got to hand it to a band who possess the moxie to put the "money hook" straight up front as opposed to teasing us in anticipation of the chorus.  Then again, the über-melodic charge that leads off "The Stranger" sort of functions as the chorus and versus simultaneously.  San Diego's Cars Get Crushed, who at times suggest what a head-on-collision between Unwound and Swervedriver might yield, really nail it on this song, fortifying an already amped-out template with a bittersweet, Mascis-esque vocal hook circa Bug.  Fantastic.  For an album that peaks inside it's first four minutes, the remainder of Blue and West still makes a solid case for itself.  Nearly as alluring as "Stranger" are "Optimator" and "Hero City," while the dextrous, shape-shifting time signatures executed on "Infrared" and "California" give me the impression that CGC had gotten an earful of their homies No Knife before they cut this album.  Blue and West was their second full length (I can share the first, Drag Explosive, upon request) and I'm working on getting their third and final offering as well. BTW, a few years ago I shared a 1996 CGC single here.  God I miss the nineties...

You and me both.

I also humbly request Drag Explosive. Please and thank you.

Will try to get it up soon. Thanks.