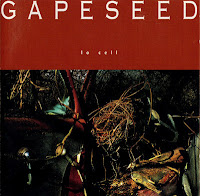 I couldn't think of a more appropriate follow-up to my Cars Get Crushed entry from two nights ago then this title, which I wisely salvaged from the "rejects" bin at the college radio station I was spinning for at the time (a hearty thanks to whomever was music director in 1994, or thereabouts).  Like CGC, New York's Gapeseed were early adopters of Unwound's harsh, guitar-rawk dissonance, but were even more frayed and dynamic.  I'm picking up more than a few traces of Archers of Loaf, Polvo, Sonic Youth, and to a lesser degree Dino Jr. and Garden Variety, but I'd argue this trio's stripe of manicured noise was even less tidy than some of the aforementioned, often attributing to Lo Cell's mixed outcome.  Relatively tuneful and rewarding respites populate the frantic opener "Thirsty" and later, "Watermelon Bread," but the bulk of Cell's second half is typically a disjointed trainwreck, succumbing to incoherent and gratuitously tweaky feedback experiments.  There was a 1997 follow-up, Project 64 which I have yet to experience, but you can read plenty about it in Gapeseed's bio on Silver Girl Record's website.

I'm game Casey. Feel free to send me a link.

p.s. Thanks for those Unwound singles!

Love this ep - used to have it on high rotation when I was a high schooler... Project 64 didn't grab me as much.

Is this rip higher than 128? If so, could you possibly reup it? Thanks!