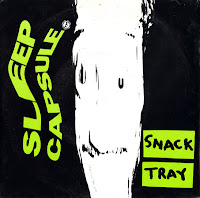 Well, I was long overdue for stringing together one of my singles compilations, and I thought Sleep Capsule would make for a fitting follow-up to yesterdays Expando Brain entry.  S/C were a Seattle area outfit who could have easily ingratiated themselves into the messier enclave of that town's much ballyhooed grunge scene.  Methinks they would have slotted in nicely with lower-rung icons Tad, Swallow and Coffin Break, not to mention much of the noisenik contingent that called Amphetamine Reptile Records home.  Their songs were a sloppy negotiation between bludgeoning, low-end riffola and downer indie punk that occasionally veered towards SST-era Dino Jr and Sonic Youth.  A veritable unholy racket if there ever was one.  Had they vaguely smoothed over some of the rough edges, Sleep Capsule might not have been the unknown quantity they were, but admittedly, they had a lot of competition at the time.  While their two albums, Mousepuss (1994) and Pink Eye (1995) were relatively consistent, this batch of singles were demonstrably more hit and miss.  It just dawned on me today after having gone a good ten years without playing them, that the vocals (courtesy of guitarist and bassist Russ and Jeff) frequently intone Mark Arm - at least when they're singing.  Otherwise, we're treated to a glorified moan or caterwaul of sorts.  Not a pretty thing, but there are some bona fide keepers here - "Birdthirst," "Mobility," and "In Half," if you're looking for a short cut.  As for the full lengths I mentioned, they've been made available on iTunes, and gently used hard copies can be obtained cheap at Amazon.  The Sub Pop single might still be mailorder-able. 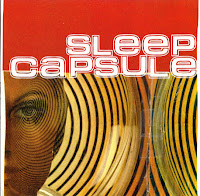 Hi!!! Thank you for your hard work! How bout this? Will you reupload this too? :D

Sleep Capsule were also contributed "Jeremy Stick" to this comp around the same time: http://www.discogs.com/Various-Things-That-Are-Heavy/release/1880944