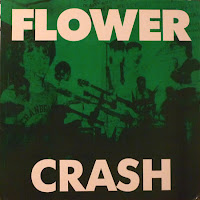 Yes, in case you're wondering, this is that Flower, New York City's own, featuring a pre-Versus Richard Baluyut on axe, though this was an earlier incarnation of the group sans his brother Ed.  If you have any familiarity with Flower it's likely via a handy 1994 CD reissue on Bear/Simple Machines Records, Concrete Sky (1987-1990) that highlighted the band's dual-full lengths, Hologram Sky and Concrete.  The Concrete Sky-era recordings illustrate just how logical a precursor Flower were to Versus, but sonically, they were coming from a from a far different angle on Crash.  You can partially chalk that up to the inclusion of a keyboardist (Yosh Najita) in this nascent version of the lineup, whose contributions went a long way in imbuing an icy, Factory Records undercurrent to the title track, and to a lesser extent on "Regret."  Despite Richard Baluyut being the lone guitarist on Crash's three titles, he makes the most of those clamorous six strings, weaving a gauzy, strenuous latticework around the band's already frenzied momentum.  So frenzied in fact, the final number, "What's It For?" hurtles into breakneck, hardcore punk overdrive.  Interesting.  Very, very interesting.

Oh gosh, so great so great! Loved this EP for years and own the vinyl, but no way to rip it. Thanks so much for your postings!!!

I'd play from this EP when I did college radio. Never thought I'd be able to hear it again. Although I've found Flower's stuff in record stores, I'd imagine trying to find this these days would involve some real dedication. Thanks so much.