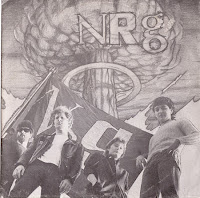 One of my hottest retro discoveries of the year came from a sterling North Carolina aggregation, Neon Rock Garden, whose 1986, Mitch Easter-produced "Never Listen" 7" infiltrated my ears with visceral, jangly delight.  I was aware of a previous NRg single (the one I'm featuring here) but I wasn't actively looking for it.  A fews ago, without any deliberate effort on my part, I was stoked to find it while browsing through a box of discounted singles at this bountiful record dispensary.   No publishing date on the wax or sleeve, but likely somewhere in the neighborhood of 1984-85.  It was recorded when the band was still a quartet, unlike the second 45 when they were pared down to a trio.  Like a lot of indie DIY combos of their day, NRg had their collective antecedents steeped in punk rock. "Suicide Song" finds them gracefully making the transition to something a little less high strung, than say "Corporate Toy's" bratty, full tilt abandon.  Perhaps this is precisely the spot where they placed the bookend to their punk era.  Ironically, sharing the same side of the wax with that latter title is "The Light," a precursor to their next phase of their tenure, ripped lock, stick and barrel from Let's Active's "new south" playbook.  As mentioned above, NRg would soon go onto record with none other than his highness Mitch Easter himself.  There's quite a bit of static to be endured among these three songs, but with any luck I'll be able to share a cleaner copy in the future.

A. Suicide Song
B1. The Light
B2. Corporate Toy

Well... I did the 4-track (cassette) demos on those. (Maybe as early a Fall '83 ... I think Tina was pretty new to the band. (Except I don't remember doing "Corp. Toy"... then again... not much work to put that one on tape... just "live" really. "The Light" had a couple of over-dubbed tracks; guitar part and vocal. And "Suicide Song" actually was bounced down to one track w/ a couple of vocals and a couple of guitar bits.) Mine are not what are on that 7".

I couldn't say how many un-circulated/un-played copies I actually have of that 7"...

"SS" and "TL" were both Gene's songs... much (most) of the difference is in that. As the change in sound.

Re-post from the bloody FB:

(Which at the time would not have been a valid Copyright notice...)

And, Tina. Am I wrong about the three songs there being done at The Drive In....?

(Wish I had the Platter Spinner plugged-up... I'd might be able to tell if those were Mitch recordings or not...)

Hello, can you please re-up this record? Thanks a lot.