No Such Thing 7" (1988, Strategically Placed Raindrops) 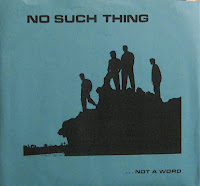 File under Gameface (or as it's often been written, Game Face, take your pick).  Before he embarked on one of the finest popcore franchises of the '90s and '00s, Jeff Caudill cut his teeth fronting No Such Thing, a long lost precursor to Gameface that I'm just as much a Johnny-come-lately to as you probably are.  It would be perfectly reasonable for you to assume NST were an adolescent, hardcore punk crew (after all, they did name themselves after an Agent Orange song), but not quite.  In his own words, Jeff imparts:

No Such Thing were active 1986-1988. Started off as a high school punk cover band, taking our name from an Agent Orange song, doing everything from Social Distortion & 7 Seconds to The Plimsouls. Evolved into a new wave/college rock band influenced by R.E.M and U2. Although we wrote and recorded about a dozen original songs, "Not a Word" and "Marching" are the only committed to vinyl.

"Not a Word" indeed exudes more than it's fair share of Edge-like arpeggios, but the flip "Marching" is doubly more affecting, with it's chiming guitar passages a la Johnny Marr, and heaps of devastating hooks.  In fact, there's no need for an in-depth appreciation of Gameface to get the gist of this ace 45, though that wouldn't hurt.  Sorry about the pesky vinyl crackle.  Perhaps I'll be able to offer a cleaner rip in the future.

As to what Jeff's been up to lately, Gameface are playing a couple of reunion dates this fall, and the first album by his new band Your Favorite Trainwreck dropped in June.  Recent years have also seen a flurry of solo activity, much of which you can indulge in at his website.

So Good Song "Not a Word"
Thanks for sharing

Thank you very much for this and for all!!!!!