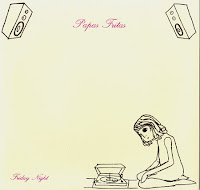 There were a hell of a lot of bands vying for my attention amidst the clamor of the mid-90s indie sweepstakes, and though they qualified as fringe outsiders at best, I made room on my plate for Papas Fritas, a co-ed Beantown trio who juggled the guitar/piano thing with modesty and moxie.  Their self-titled 1995 platter on Minty Fresh Records was an in-dash staple for many a pizza delivery run in my college years.  Like another east coast standby for me back in the day, Small Factory, Papas Fritas struck a tuneful, infectious balance between twee pop and crunchy riffs.  One tricky portion of their discography proved elusive to me for nearly a decade, namely this 45 from 1994, which I located just two years ago (a long time to be sitting on for a blog post, I know).

Maybe they were saving up their acumen and creativity for that practically flawless debut album I mentioned, because this long lusted after wax didn't move me in remotely the same way.  You can chalk part of that up to the apparent exclusion of female drummer Shivika Asthana on the microphone for all three songs (though she'd have a very prominent singing role on P/F's soon-to-follow trio of albums).  The near seven minute "Friday Night" plays out like a prolonged rehearsal take of a very unseasoned song.  Even "Smash This World," the only track here to be retooled for Papas Fritas sounds stifled and unenthused.  Win some, lose some I suppose, and luckily they more than made up for this little transgression during their tenure on Minty Fresh.  BTW, I know for a fact that P/F had at least one publicly circulated demo tape from this era, possibly more.  If any of ya'll can digitize it/them please get in touch.  I might repost this single at some point if I can rectify some of the pesky vinyl noise.

A. Friday Night
B1. Smash This World
B2. Angel

Been looking for this too, thanks for posting.

Bee looking for this for years!!!!

Hi. Could you please re-up this EP?
Thanks in advance. :)

This is a really very informative article, there is no doubt about it. Thanks for sharing this article with us. This is very nice of you. 토토

Excellent post. I used to be checking continuously this blog and I’m inspired! 온라인경마

Very helpful information specifically the final phase. I handle such info a lot. I used to be seeking this certain info for a long time. 바카라사이트

you’re in reality a good webmaster. The website loading velocity is amazing.
It sort of feels that you are doing any distinctive trick. 토토

everyone an extremely breathtaking chance to read from this blog. It is always so lovely and jam-packed with a great time. Feel free to visit my website;
야설


Excellent goods from you, man. I have understand your stuff previous to and you are just extremely excellent. Feel free to visit my website; 일본야동
일본야동
국산야동
일본야동
한국야동

Yes i am totally agreed with this article and i just want say that this article is very nice and very informative article.일본야동
일본야동
국산야동
일본야동
한국야동

Really appreciate this wonderful post that you have provided for us. Great site and a great topic as well I really get amazed to read this. It's excellent. Feel free to visit my website;
일본야동
일본야동
일본야동
일본야동
일본야동