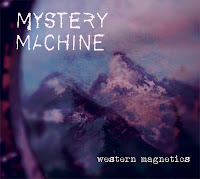 During their initial run, which pretty much spanned the entirety of the '90s, the Vancouver area noise-pop merchants Mystery Machine delivered three albums of tuneful (and tasteful) indie guitar rock.  They're back in the year of reckoning with their fourth LP, Western Magnetics, and playing several reunion dates in Canada (mostly in Ontario) starting this week!  Probably should have announced this sooner, but I digress.  From the get go, the commencing "Pronto" shows that MM haven't sacrificed any of the sinewy, amped-out sprawl that begged comparisons to Sonic Youth and Bailter Space.  Unlike that distortion-ravaged pair, these guys also brandish a sweet spot a mile wide wherein a poignant quotient of melody is never relegated to the back seat.   Though not quite brooding, the tension threshold on albums like 1992's Glazed and 10 Speed, which followed three years later, was nonetheless slightly elevated, lending pensive and perhaps even an austere element that went a long way in defining MM's modus operandi.  As their 1998 platter Headfirst Into Everything indicated, they were beginning to lighten up a hair.  In terms of overall tenor, Western Magnetics is evocative of all their preceding records, though typically not within the confines of the same song.  "Octagon Skylight" and "Snow" seem to pick up where the slightly chilled-out Headfirst... left off, while the careening firepower of "Bullshit Parade" and the aforementioned scorcher, "Pronto," tack in the direction of MM's earlier endeavors.  Frontman Luke Rogalsky commandeers "We Won't Return" in hushed vocals, while "Northern Analog" maneuvers in total ambient mode, bringing things to a startlingly stark and uncharacteristic conclusion.  In a nutshell ...Magnetics is the most varied recording in the band's oeuvre...and thereby the most intriguing.  For a limited time you can stream the whole thing at Exclaim!, but please purchase a copy from Amazon downloads, or physically from Sonic Unyon,
Posted by spavid at 6:40 PM

A few years ago I went to a concert and ran into a friend. He asked for a ride to another bar after the show was done. We get in my car and we start talking about obscure '90s bands and he says, "Did you ever hear of a band called Mystery Machine? I had one of their CDs but haven't thought about them in years." Coincidentally, not only had I heard of them but I had a copy of Glazed sitting in back seat which I promptly threw in! Thanks for the post, I'll have to check the new one out.

I enjoy everything I've heard by MM. BTW, I didn't realize the new album consisted of "old" songs. Thanks for pointing that out on FB. Never quite understood the "shoegazer" tag people liked to pin on them, but maybe it's just me.