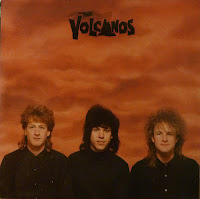 Holy mullets, Batman!   Try not to judge this book by it's rather dated cover, because not only is track four ("Rescue Me") worth the price of admission alone, it's also one of the finest power pop songs to ever come out of the eighties.  So solid in fact, there's really nothing else by The Volcanos that can quite match it on this platter.  "Rescue Me" was actually recorded when the band was going under the name Five Cool What, and originally appeared on a compilation 7" that sadly, I'm not in possession of.  To varying extents, you're bound to hear a bit of an AOR bent infiltrating these goods, not far removed from the original power pop premise of say, Enuff 'Z Nuff or One on One-era Cheap Trick.  In short, radio friendly fare but not too pandering.  Other recommended cuts: "Shannon," "I Believe," and "She Told Me."  The blokes in the middle and right on the album jacket (Greg Brallier and Fin Seth, respectively) went onto considerably more acclaim in The Tearaways.

"Rescue me" is "one of the finest power pop songs to ever come out of the eighties."

Now, this I have got to hear!

I will check back in after I am able to access it.

Recently picked this up as a blind buy and was pleasantly surprised by the infectious power pop rockers. Nice keyboard touches as well.

Would it be possible to re-up this one?