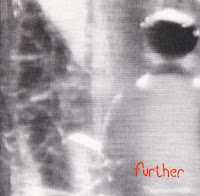 I recently had a request for a re-up of further's grimes golden ep that I shared way back when I first began Wilfully Obscure.  That inquisitive requester also challenged me to posting further's super griptape disk, which unfortunately I don't own, but I'm compensating with the original version of griptape, which unfortunately offers fewer songs than said "super" version.  A completists nightmare, I know. 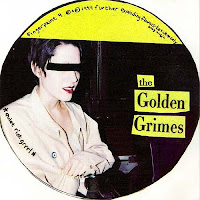 You can read a more detailed account of further's backstory here and here.  griptape was their first album. Upon it's release, it was pretty obvious to anyone who heard this wonderfully derivative, lo-fi sprawl that these guys picked up the ball J Mascis pitifully dropped after Dinosaur Jr.'s 1988 masterpiece, Bug.   Over the course of a second album, Sometimes Chimes, the aforementioned Grimes Golden ep and a few more short form releases, further evolved in much the same way Lou Barlow reinvented himself via Sebadoh.  All of their recordings were issued on micro-labels, like their own in-house Christmas Records imprint.  After dissolving in the mid-90s, members of further graduated to Beachwood Sparks and The Tyde.

Thanks for having an amazing blog

Thanks J Will! Looks like we get the bonus tracks after all.

hi spavid, i finally got a chance to listen to the griptape post and really enjoyed it thanks, as i already had the others. is there any chance you can re-up those 3 tracks from super gripetape? also, in my research of further i saw that they had a couple subsequent offerings, punkrockvampires and next time west coast. any chance you can post them? thanks much

I updated the Griptape link. The bonus tracks will have to wait. Sorry.

Any chance for a re-post on this? Thanks!

Can you repost Grid tape please, the link seems to be broken...
Thx !!