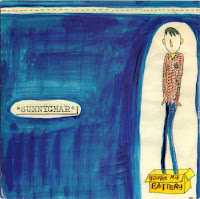 I'm not about to purport to have any firsthand knowledge, or even a rudimentary awareness of Japanese indie rock and/or so called "J-Pop" in general.  In fact, my only entry for a Japanese artist, The Playmates, stretches all the way back to 2008 for their stupefyingly impressive Short Wave album.  It's not so much a matter of prejudice, rather utter lack of exposure that would point to a deficit of music from the nation with that nice, plump red dot on their flag.  Sunnychar were a coed five-piece from Tokyo, whose chipper punk-pop conveniently brings to mind one of the only Japanese acts I am notably familiar with, Shonen Knife.  On what is presumably their only stateside release, Sunnychar ooze vivacious charm and vigor, decked out in harmonies and cutesy pizazz that only a female-fronted combo from the Land of the Rising Sun could so capably deliver, particularly on the leadoff cut, "You're My Battery."  Two more originals ensue, as does a cover of Yoko Ono's "Sisters O Sisters."

Thanks for the post - I've got this already in vinyl (so that's at least two sales!) but this will save me trying to dig it out.

they had a cool track on the Slice of Lemon comp, too (which actually led me to pick up this EP). thanks for posting it!

You're welcome. Just FYI my copy had a lot of pops and snaps, but I was able to remove the bulk of them.

There's a "Complete Collection" CD available in Japan (though I think it's out-of-print now) which has 14 tracks including the tracks from this EP.

I love that EP. I got it in a bargain bin at a record store in Ottawa that was closing (along with a Potatomen 45).