Alarming Trends - You Make Me Live in a Trailer (1987, Scorched Earth) 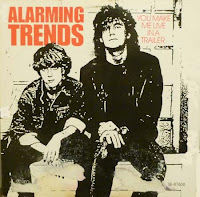 Details are a bit sketchy, but starting life in the mid-80s, Denver's Alarming Trends, helmed by Rebecca Watson released this album three years into their career and recorded sporadically thereafter.   The most revealing piece info I have to offer on this coed quartet is that a cult-classic movie of the same name was directed by guitarist Ronnie Cramer in 1987, which naturally featured the band.  You Make Me Live in a Trailer kicks off in almost disarming fashion with "What Does Your Heart Say," a relatively conventional pop tune before launching into a cornucopia of songs that range from surly no-wave to icy post punk with modest goth overtones, not to mention intermittent, avant excursions.  The frantic, punky "Mangled Never Center" stands out vividly among Trailer's comparatively calmer environs, making me long for more selections in a similar vein.  I think I need to live with this record more before reaching a definitive conclusion, and luckily enough you have the luxury of partaking in such endeavors at your leisure.  Alarming Trends continued to churn out music as late as 2001, and have two additional albums available through CD Baby.  Ronnie Cramer has a robust selection of solo albums to his credit, as well as low-budget films, which from the looks of his website is more than just a casual hobby.   This rip was taken from a very static-laden slice of vinyl, so don't say I didn't warn you.