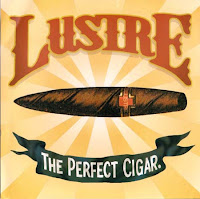 Ahh.  I love the smell of post-grunge in the morning.  "Alternative" by virtue of the Seattle tsunami of  '91, Lustre delivered hulking, Collective Soul-sized riffs, within the confines of a demonstrably more credible package, a la Sugar or Head Candy, if that means anything to you.  Lustre emerged from Chapel Hill, NC of all places, which you'd never guess in a bazillion years from any of their recorded output.  A commendable full length followed in 1996, that frankly went nowhere, but the LP track "Nice Overalls" made an appearance on the reasonably successful Empire Records soundtrack.  These guys were sticklers when it came to melody, and good on 'em for that I might add.  Assuming their album hasn't been given away elsewhere I can share it if anyone's interested.  Both of these songs aren't on it, so chomp away on this lil' stogie and enjoy.

A. The Perfect Cigar
B. Sexy Yard Raker

Loved the full length. It ripped. Broke it out a month ago. Theres also a cool vid for Kalifornia you can catch on youtube. The audio quality is horrible, but you get the idea. Great post.

I'd love to hear the full length. Post away please.

I'll be sharing the album soon. The "Klaifornia" video is cool. I actually watched it just before I wrote the single up. Hadn't seen it since it came out.