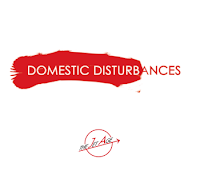 Maybe it's the hypocritical cynic in me but even with all the technological advances that make obtaining (and for that matter learning about) any given piece of music so instantaneous, I still yearn for, dare I say 'a more complicated' era when fanzines, 120 Minutes, college radio, and last but not least, word-of-mouth was the delivery system for virtually any and all exposure for new and exciting new zounds.  Maryland's Jet Age don't necessarily brandish the same musical motifs of my nascent discovery years (late '80s/early '90s) but the essence of Domestic Disturbances is more then than now.  Ironically, their encompassing sonic foundation is constructed on one that's a little more current, say firmly in the realm of Ted Leo, and to a lesser extent The Thermals.

As with most musically inclined trios, economy is key, and the Jet Age don't fritter away one iota of it, endeavoring in the stripe of sharp, rhythm-centric post-punk that employs an abundance of clipped, clangy chords, heavy-goes-it snare drums, and occasional plumes of static, executed as only a lean, hungry skeleton crew can.  Disturbances is one of those rare records that's as lovingly roughewn as it is painstakingly tight.  Most bands operating under such similar premises would likely convey themselves as insular, even dry, but in their case the Jet Age write songs that are thoroughly heartfelt.  "Hey, Captain" is searingly soulful in that Stonesy Some Girls kind of way, "Left for Dead" boasts hefty swells of distortion, with a dash of tremolo tossed in, "Home" unfurls guitar god solo's amidst an engulfing echoing stew, and on "I Want to Touch You Again," the guys manage to seize Gang of Four's metronome for an infectious four minutes.  And that little synopsis covers only one third of the album.  As an aside, mouthpiece Eric Tischler possesses a vocal timbre very much on par with Joel Plaskett (who you might know from bygone Halifax rawkers Thrush Hermit).  If you're as chuffed and heartened as I am, put a little Jet Age in your life and order  Domestic Disturbances here, or go the digital route via Bandcamp.
Posted by spavid at 4:09 PM

Awesome! Do you have the Hurricane Lamps records? It was Eric and Greg's band prior and pretty similar in sound.

Yeah, I'm pretty sure I have one. Forgot the title.