I thought that you had asked me an all-important question… 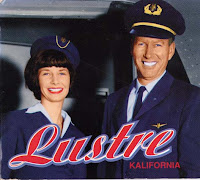 Upon sharing Lustre's album and single a few days ago, it was brought to my attention that there was yet another single kicking around from these unlikely Chapel Hill, NC denizens.  Actually, make that an ep, a promotional one at that, supplied to radio stations and the like in support of the "emphasis track," "Kalifornia."  I've gone on about how utterly addictive Lustre's melodious riffola is (which you can peruse my testaments to via the links above), so I'll get right down to the disk at hand and point out that the Kalifornia ep features two really excellent b-sides, "Great" and "Drag" that so far as I know appear exclusively.  Things close out with a slightly edited version of "Nice Overalls" which can be found on the Lustre record, as well as the Empire Records soundtrack.  Unless some demos or outtakes surface this is likely to be the final words on Lustre, so far as these pages are concerned anyway.  Cheers.

Just letting you know, there are quite a few more songs, if you go to You Tube and search Lustre Album, someone has recently posted it, along with several extra awesome tracks. I hope you see this, because I don't know how else to contact you.