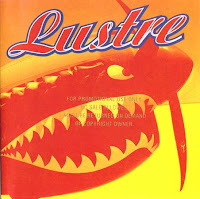 Holy cow.  I forgot what a damn good album this was, until I played it for the first time this week in probably close to a decade.  Last Thursday I featured a single from Lustre, an unlikely entry in the Chapel Hill, NC indie rawk sweepstakes from fifteen years or so ago.  Actually, they really couldn't boast much of an indie pedigree at all, considering this self titled platter was delivered by A&M.   Proving just how much fun three chords could be, Lustre's penchant for muscular, guitar crunch and penetrating hooks put them in league with Sugar, Fig Dish, Head Candy, and other such saccharine laden riff brokers.  A dash of '90s AOR didn't do Lustre much harm (or good) but even with every lick in place they failed to make a pronounced dent at lamestream radio.  I mentioned in my original Lustre post that the group's closest claim to fame, "Nice Overalls" turned up on the Empire Records soundtrack, and for the love of straight-to-video, it's also on the album.  As a final thought, copies of Lustre are pretty scarce to find without a gold promo stamp marring the cover.  In addition to the track list and d/l link, you can also watch the video for "Kalifornia" below.

Great record with absolutely delicious guitar tone...though there are way more than three chords! ;) My copy has the promo-stamp as well. Do you have and/or need the Kalifornia single? It has 2 excellent b-sides ("Great" and "Drag") that are in the same vein as the album.

I may have the Kalifornia single. Is yours a CD? Will check and get back to you. Thanks.

I have a non-promo version and I still enjoy listening to it now and then. Got it loaded on my iPhone. Favorite track is Kalifornia.
First discovered them on the "on-tour" series on PBS as I recall. Good stuff.

Yes, the Kalifornia single I have is a CD. I also have the "Perfect Cigar" 7" which contains "Sexy Yard Raker" as a b-side. I have the "Nice Overalls" CD single as well, but the b-sides are repeats from those others.

Any chance you could re-up this again? Maybe the 7" too... Pretty please?

Again, thanks for turning me on to these guys. Kinda reminds me of Superdrag.

One of my favorite albums in College...ironically from playing said Promo stamped album at the college radio station. It had been sitting on the shelf in plastic, but I decided to check it out and was not disappointed. A sadly overlooked band and album.