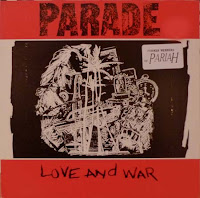 It was nearly three years ago that I shared a scarce slice of wax by Concord, CA's Parade, titled Circle of Deception.  Still got that one in your ipod?  Yeah, I thought so.  It wasn't until I was browsing at Jerry's Records in Pittsburgh that I discovered there was a second Parade album, which I'm featuring today.   Turns out they were up to their same old tricks on Love and War, copping a pint or two from the 'Mats/Magnolias/Junk Monkeys wet bar.  Ringing guitars and punchy, high strung exuberance all around, with a number of comparatively refined ballads on side two.  If any of you can offer some details on Pariah, Parade's precursor band.  The singer/bassist is Ray Lujan, and I have to wonder if he's the same Ray Lujan who writes for Maximum Rock 'N Roll.  I suppose I'll keep wondering 'til someone confirms that suspicion.

Do you/did you live in Pittsburgh? I lived in an apartment right around the corner from Jerry's 1996-1999. My LP collection grew tremendously in those years.

No, actually I don't, but I'm long due for a trip. Great store.

pariah was more of a classic southern california punk band, like agent orange, adolescents, m.i.a. maybe not quite in the same league, but good melodic stuff. you can find the re-issue cd version of their posh boy album "youths of age" on ebay for really cheap.

it is the same ray lujan. i used to always check his mrr top 10's and reviews since he was the resident pop punk guy pretty much. i used to see him at bay area shows when i first moved there too. he went onto another par- band after parade, the parasites. just for a few years i believe.

Thanks for the info Neal! Had a feeling it was the same Ray Lujan. Maybe I should email him...
Will have to check out Pariah one of these days.

Dude, my Dad was in Parade. They opened for the Damned and him and Ray got a picture with Dave Vanian. I think Pariah is way better than Parade and I always jokingly give my Dad shit for "ruining a great hardcore band."

Cool beans. Make sure to show this to your Dad, as I'm sure he'll get a kick out of it. I'm looking forward to hearing Pariah now more than ever.