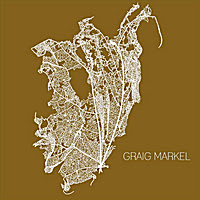 Upon discovering his Seattle noise-pop trio New Sweet Breath back in 1995, via their first full length, Supersound Speedway, my appreciation for Graig Markel's music grew and grew with each successive record that he had any involvement with, whether it be more outings with NSB, his electronic offshoot Animals at Night, and not the least of which solo recordings.  By my count, 2012's brand new self-titled platter is his sixth under his own name, following up 2007's Via Novella.  Hardly spending the last four years slaving over an ornate, orchestral rock tour de force, a la Brian Wilson in the late '60s, Markel instead returns to the table with a refreshingly lucid batch of ten acoustic songs, tracked straight to analog tape in his domicile studio.

Far from a wordsmith in league with the likes of Waits, Westerberg, or Pollard, Graig Markel's isn't an erudite or arty scribe, rather it's the voice that sinks in so indelibly.  His sparse, no-frills arrangements lend a purity to this collection, perfectly befitting it's melancholic tenor, that wisely eschews any wrought or maudlin transgressions.  Par exemple, "My Last Words," as it's title implies, mines a mournful vein, but no more so than Nick Drake's Pink Moon, a classic he's apparently taken to heart.  Economical yet thoroughly substantive, Markel's balled-esque soliloquies are undeniably straightfoward, but soothingly uplifting.  Graig Markel is available from CD Baby, and on white vinyl through his website, but if you need any further convincing embrace the sound on his Soundcoud page.
Posted by spavid at 9:32 PM

That guy is amazing.
Btw, you posted that sampler of his old band. Any chance of posting all of their debut? Can't seem to find it anywhere.

I think the one you're referring to is Supersound Speedway. Now that iTunes and the like are selling it, I'm not at liberty to share it. Sorry about that. Amazon might be selling it as mp3s too.

Oh, ok then. I'm not much a person that buys things online. Since it's impossible to find it on an actual store I will use grooveshark to listen to it at least.