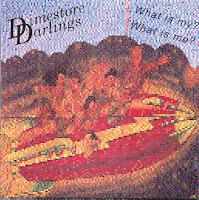 The curiously titled What is My? What is Mo? is one of a handful of demo eps recorded by the Dimestore Darlings, a spirited New York bunch who possessed the nonchalant moxie and charisma of some of their key inspirations which thankfully included Dramarama, the Replacements and Soul Asylum.  A familiar recipe, but one that's aged nicely since these four cuts were committed to tape the better part of two decades ago.  The Darlings are what the Hold Steady could have amounted to if their singer ever attempted to carry a tune (harsh, I know).  Turns out these guys have a Tumblr page with streaming audio of these tunes and about eight more, plus a super thorough and entertaining bio.   Highly recommened.  I've plucked a paragraph from that bio which specifically addresses this tape.  Enjoy (or not).  But you will.

We emerged 30 hours later with the second EP in hand: What Is My, What Is Mo?—the title the result of a Justin and Steve misread of Gene Simmons asking the musical question “What is my charisma?” It was heavy on the kick drum, frenetic, and a strong move forward. Justin’s “Sometimes It’s Me” and “Damage” were both genuinely surprising with their lyrical depth, and the grooves themselves had a dizzying, reckless feel, a kind of walloping gait that left no room for instrumental niceties, but were still both interesting and accessible, particularly “Damage,” which had a rough-hewn Keith Richards vibe and a drunken nose-sung vocal that worked perfectly. It’s a great song. In all, What Is My, What Is Mo? was an adrenaline-fueled, determined sound of a band blasting off, which Jay nailed when he yelled “I’m stressing out” in the second track, his “Waste of Time.” And Aaron plays the living hell out of his kit throughout. A fun time had by one and all: Imagine the Keystone Kops, loaded, making a record against an insane deadline and you get the idea—fun but exhausting.

Just as an interesting detail, one of the founding members of Dimestore Darlings was Justin Kirk, who can currently be seen on Showtime as the stoner uncle in Weeds.