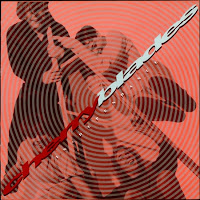 I'm not sure what the UK music press had to say about the Cherry Blades at the time In-Dependace made its way into the shops, but in all likelihood it wasn't very concise.  Why?  Judging from these eight songs, the Blades were serial genre-hoppers, sounding like a different band on damn near each one, making any sort of broad stroke review all but impossible.  Some of the tangents explored include patently trippy pysche revival ("Happy Families"), ragged indie guitar excursions ("Everyday is Extreme" and "Face #1") to relatively linear Britpop ("Everything Is Extreme"), with plenty of halfway points in between.  Some of the heavier cuts belie faint dream-pop undercurrents, blending in seamlessly.  Though they were unlikely deliberate in doing so, the Cherry Blades assembled an album delivering a makeshift microcosm of where British indie music was headed at the dawning of the '90s.  To my knowledge, the band had at least one more record to their credit, an ep titled Imperial.

Their EP is also really good.

This file is marked as illegal.
Started? Again?

EP has been posted here: http://electronicvibes.blogspot.co.uk/2011/06/cherry-blades-imperial-ep.html

Love the 'In-Dependance' CD, thanks for posting again.