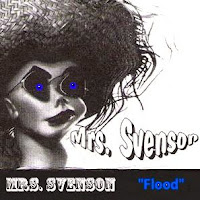 I don't know how many of ya'll were paying attention this past summer when I shared a cassette demo of a long defunct Regina, Saskatchewan outfit that went by the name of Mrs. Svenson, but in my write up, I alluded that more recordings were said to exist, particularly a CD, Flood.  As it would come to pass, Flood would never see the opening of it's proverbial gates.  An albums worth of songs was recorded, but never issued due to the band's dissatisfaction with the material.  In any event, I've been given clearance to share them with the public, and considering how stoked I was with that six song tape I consider it something of an honor.

Mrs. Svenson, having culled their moniker from a random search in their local white pages, had been active since the late '80s and had gone through a myriad of lineups, with drummer/vocalist Mark Fleischhaker being the group's only constant presence.  Those aforementioned half dozen "demos" (please refer to the tracklist  in the original post linked above) were to carry over into Flood in the same incarnations, save for a remix of "Fall."  An additional six songs were to encompass the full Flood experience, which are presented here as well.  Also included are alternate versions of a couple songs.

In my original Mrs. Svenson article I mentioned that the band took some more than discernible cues from Canadian contemporaries the Doughboys.  That comparison is particularly warranted on such melodically indelible slammers as "June," "Fall," and "Shoes," leading me to believe that the 'Boys Crush album was vying for some serious playing time on Svenson's collective boom boxes and in-dashes.  While not wall-to-wall perfection, Flood exudes more than it's fair share of magic, and hinted of even greater things that should/could have been in the offing had the band's luck panned out a little better.  Speaking of which, I'll have more Mrs. Svenson coming your way in the not too distant future.  A big, big thanks goes out to Oxy for stringing this altogether for me, and creating some spiffy sleeve art to boot!

Was just listening to these guys yesterday, good timing ha.

Good timing is out specialty.

Thanks for the information.
please visit:www.nhlhockeystream.tk

Thanks For the good information.
http://www.livestreamsportshd.com/

Thanks for the good information.
http://www.refreshonlinecenter.com/

Hi can you please reup this one? I need to hear this version of Life Lesson!!