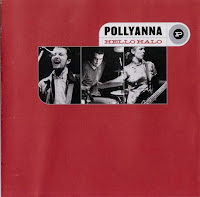 Until I have a chance to rip more vinyl (should be another day or two) I thought I'd offer everyone an upgrade in FLAC (aka lossless audio) to one of the most popular albums I've featured on Wilfully Obscure to date.  Pollyanna's third LP, Hello Halo never saw proper release in North America, but despite it remaining an endearing favorite in their native Australia, it managed to go out of print roughly a decade ago.  Since I shared ...Halo nearly four years ago, I've received numerous requests from several of you to fill in the gaps, and post Pollyanna's other albums and singles (the latter of which I still have to attend to), yet despite their fairly robust body of work, it's these fourteen songs that I retreat to time and time again.

In my original entry I remarked that this wasn't album one could easily genre-lize, so to speak, rather there were a plethora of facets running the gamut from power-pop to emo to more traditional alt-rock.  In that respect, Hello Halo is just as elusive today as it was when I discovered it in the late '90s.  Truthfully, I opt to indulge in this album's post-adolescent ruminations, cautionary themes, and bittersweet, empathetic ethos rather than it's underlying sonic constructs (which I have to admit are impressive in themselves).  For every visceral, gut-reactive surge ("Cinnamon Lip" and "Pulling Teeth" to name a couple), Halo turns on it's head in a markedly sobering and contemplative direction ("Cooling Your Heels," "Velocette"), with plenty of arresting offerings that fall somewhere in the middle.  Will Pollyanna's moxie work it's way into your psyche as it has mine?  Only one way to find out, and if you're feeling a little less committal and don't want to absorb 300 mb of hard drive space, the MP3 version is at your disposal here.

I'm looking for the cover image of Junior, rather than Junior Rocks... Do you have it?

You forgot to link up LongPlayer. ;)

Also, Gaslight Radio, have you check out any off there stuff? I can help you out if interested.

Any chance of restoring the link? Thank you so much!!

Such a great music, but nowhere to be found.
Please re-upload.