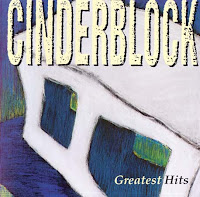 Thought this would be an appropriate follow-up to my Lustre entry from yesterday, not that the two groups share any sort of relation, but who sonically speaking are cut from almost identical sackcloth.  There's no readily available info to be had regarding Cinderblock, a three-piece San Francisco treat whose Greatest Hits album is almost certainly titled in jest, given there doesn't appear to be any releases preceding (and in fact, following) it.  Nothing particularly fancy, in fact a bit anti-climactic as far as rugged, power-chord fortified rock goes.  Despite some spicy axe squalls from leadman Jason Apodaca, Cinderblock strike me as a wee bit sedated on the John Strohm produced Hits, leaving me to wonder what demo or rehearsal takes of the relatively stimulating "Leaves" and "Bed and Shower" would have done for this pair or ears.   The material here occasionally brings to mind the Pedaljets, albeit with more of an AOR tilt.  Furthermore, I have big reservations for the two concluding clunkers, "This is Me" and "Everything," but don't be sad, eight out of ten ain't bad.

I bought this on CD from Bleeker Bobs in 1993, on the recommendation of the counter clerk. And I love it. Since then I have been trying to find out absolutely ANYTHING about the band or its members. Did they ever record anything else?

I even emailed Restless several time in the mid 1990s, but they never responded.

As DoctorDee asked... any updates at all on these guys?

As DoctorDee asked... any updates at all on these guys?

The drummer is my Social Psych Professor at UC Davis

Thank you very much for all the reposts.
Can you also, please, repost this album?
Best Regards
Stathis

Hi. Jason here, from the band CINDERBLOCK. Thanks to anyone who has ever listened and like our CD. I have a solo project in Houston called THE CONTACT LOW

You are welcome to download a dozen pop guitar garage noise gems at my bandcamp site for FREE. Thanks!