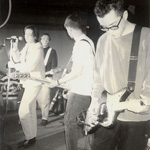 Quite simply, this is a band that I wish had stuck around for another album or two, or at the very least done a reunion tour.  Heck, come to think of it Velocity Girl didn't even leave us with a much needed singles and b-sides compilation.  While some of those 45s are long gone, we at least have their three albums for Sub Pop readily available, the second of which, 1994's Simpatico! is the era this concert is situated around.  Technically, this gig is slightly pre-Simpatico!, and as such we get to hear a host of cuts from their debut Copacetic, and even the inimitable "Forgotten Favorite."  This is a soundboard recording, though you might dispute that claim on the first few tracks.  Sarah Shannon's vocals are fairly prominent in the mix, but you would've probably figured that at on your own.  This isn't a bad place to sample Velocity Girl for any newbies in the audience.

There were a few VG reunion shows in the early '00s...I know the very first was a benefit for Bridget Cross held at the Black Cat in DC with Mark Robinson and (The Sounds of) Kaleidoscope opening. I think they had one or two more and released a new song. If you want pictures from that show or the song, leave a comment here and I will get them to you.

I asked Mike Schulman of Slumberland about, "When are you gonna do a singles comp?" He reminded me that they DID release a singles collection--which is still in print, by the way. (And it doesn't collect their Sub Pop b-sides--just their slumberland sides). Asked Archie Moore that same question, he said, "Nobody really remembers us any more, so probably never." Which is kinda sad.

Hey! I recorded this show!

And please note, this is the Shoebox in ATHENS. Not Atlanta.

You are correct chnkltgy, this show was actually from Athens, GA. A big fat typo on my part. I suppose I also owe you a hearty thanks for recording this gig as well! Pretty awesome of you to archive this performance. It's a good one. If there's anything you're looking for please let me know. Would be happy to return the favor.

i have to admit, Spavid, you were a bit too generous about the quality of this recording. I remember VG were often accused of being a bit too "slick" in the studio, and this recording does the band no favors. You are absolutely correct in that her vocals are high in the mix. It probably sounded okay in the club, but it sounds horrid here.

I do, however, think you need to do a 20th Century Masters of some of those wonderful VG singles!

Will see about getting some VG singles up at some point, and maybe even another live show, but there's not much floating around. My first time seeing them was when they opened up for Superchunk in '92. Simply mindblowing.

It's a good band and I would like to have their last album 'cos I've been hearing to many opinions about them. I will do my best to download it. Thanks for the link above!

It is indeed a good band, the drummer is very very good.
Indian Pharmacy

For a fellow who still misses Velocity Girl to this day, hearing this show would be great, no matter the quality? Would you be willing to upload it again? Please and thank you!

Thanks for re-upping this show! I can't wait to hear it!