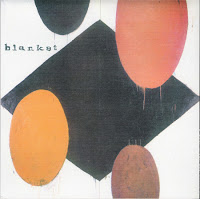 Picked this up a few years ago for the sleeve.  Nice cardboard stock paper too, but all packaging concerns, Blanket was a low profile Seattle band who according to the Cher Doll Facebook page were: "Inspired by Spacemen 3 and The Velvet Undergound." The long-ish A-side, "Ocean," bears a negligible psych-rock angle, but the flip "Picked Apart" is markedly better, treading not so lightly in the footsteps of Galaxie 500.  In fact, the spindly guitar bit that winds down the song is reminiscent of the billowy conclusion of Galaxie's "Fourth of July."  As an aside, Cher Doll Records was responsible for releasing Neutral Mile Hotel's debut single, which I'm sure is a sheer bargain on Ebay.

A. Ocean
B. Picked Apart

Great single, I've got this. The guy, Henry (who was in other bands too) used to have a pretty cool art blog where he'd sometimes post older mp3's.. don't know if the blog is still active.