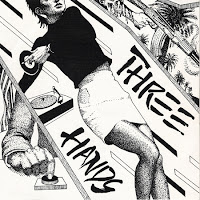 The fact that an ingenious, post-punk Boston act from the early '80s happened to arrive immediately on the heels of a far more seminal post-punk band from the same town, who by the way had just waved their collective white flag, strikes me as too much of a coincidence, but in the case of Three Hands, I have a feeling it was merely that and nothing deliberate.   Though similarities to Mission of Burma emanate from both sides of this ace 45, I don't believe this unheralded trio had any intention of usurping the throne belonging to Roger Miller and Co.  However modest or ambitious Three Hands' aspirations were is entirely irrelevant at this point, and hardly factor into Mark Kopenits ringing, clangy fretboard maneuvers that gracefully tumble down like a waterfall of minor-chord arpeggios, imbuing "Climb" with so much of it's texture and panache.  "Big Person" places more emphasis on choppy rhythms than melodic riffs, and as such acts as a fitting counterpart to the aforementioned "Climb."  According to a post on New Wave Outpost, this wasn't Three Hands only single, and on a sadder note, Kopenits passed away in 2009.

A. Climb
B. Big Person

Are these the right tracks? I wouldn't call this even related to Mission of Burma. More British than Boston.

Eye of the beholder I guess. Doesn't sound like a carbon copy of Mission of Burma, but miles away from any significant Brit influences.

Big Fan of Climb... thanks!

Ah, and meant to say, I too hear the relation to MoB, something about the sound definitely reminded me of Burma on 1st listen, and still does to this day..