Otis and the Elevators - Some Career (1986, Smoking Munchkin) 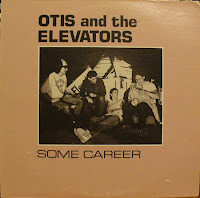 The debut platter from this Champaign, IL four-piece conjures up what might have resulted if the Feelies or Popealopes had skewed more towards classic rock than left of the dial.  Not an entirely unappealing prospect, but it's one that was better left in the hands of Otis and the Elevators than the aforementioned.  Owing a far more pronounced sonic debt to Cream than the Chameleons UK, the long defunct Elevators profess on their Facebook page to amounting to a "jam band long before there was such a genre" during their 1985-90 lifespan.  By this set of ears, certainly not in the realm of the Dead, Phish or likewise, so I wouldn't let that claim scare you off.  Some Career's most striking anomaly is perhaps "Dominate," a tight slice of UB40-inflected reggae pop that manages to blend in just fine with the rest of the proceedings.  I have Otis' follow-up album, Cross the Bridge in my possession, so perhaps this won't be my final say on the band.  My apologies in advance for all the annoying surface noise.

Do you have ties to Champaign? Either way, thanks lots!

No. Visited there a few years ago, but that's about it.

Until you posted the Facebook link, I'd never noticed Jonno Peltz drummed for both The Outnumbered and Otis and the Elevators. On the off chance you're unfamiliar with The Outnumbered, Holding the Grenade Too Long is nothing short of amazing.

Tough to decide from the write up if this is worth checking out.

But, of course, I will take the plunge.

Keep up the good work.

I didn't grab your transfer, so I'm not sure how good or bad it sounds, but here's Foolish Man from a transfer I did a couple of years ago that sounds pretty nice IMO:

I knew of a band in the late '70's, played in the virgin islands, most from NY City, "Otis and the elevator band" is either a popular bans name or they have been around since the 70's, if so, I don't recognise any of them, especially the drummer, who was a male bono look alike.

I knew of a band in the late '70's, played in the virgin islands, most from NY City, "Otis and the elevator band" is either a popular bans name or they have been around since the 70's, if so, I don't recognise any of them, especially the drummer, who was a male bono look alike.

The 85-90 time tag is correct for this band. Those were my undergrad years at U of I, and I saw the band many times at Mabel's on Green Street. Big favorites. I used to have Some Career, but it went missing somewhere in the last 25 years along with my Mudhens records (Waxing the Cat, etc.). The Mudhens were more blues based, but were another great local band and peers of the Elevators. I'm looking for a legit copy of Some Career, but if anyone still has the mp3 set as a placeholder, I'd be glad to have it.

Any chance of re-up both Otis and the Elevators albums?