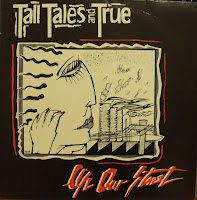 This past January I shared the first ep by the long defunct (and for that matter completely unheralded outside of their native Oz) Tall Tales & True.  In that post I mentioned that it was sent to me as a present from one of my most generous friends down under.  In addition to that record, he included a clutch of other as well, which I'm just getting around to sharing.  Both of these 12" eps came to light before the first LP, Shiver, and as is often the case with early releases, it showcases a nascent side of the artist before they were molded by the whims of the "industry." 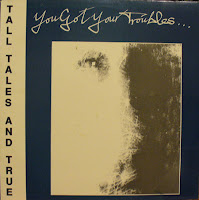 "Up Our Street" is one of the Tales career finest, a polished but rugged slice of left-of-the-dial rock, with a dab of Americana that would do Stateside contemporaries the Del Fuegos and Guadalcanal Diary proud.  We're treated to a pair of hep '60s remakes on the flip, "7 & 7 is" and "Luicfer Sam," but you'd be hard pressed to detect anything in the psychedelic realm permeating TT&T's original compositions.  And speaking of originals, there are four more occupying the "You Got Your Troubles" 12."  The title track exudes the more pedestrian bent of early '80s Stones, while the most satisfying of the three b-sides, "Cyclone Sally" could pass for something off a Mick solo album from the same era.  That being said, beats the hell out of me why I like it so much.  The remaining pair are acoustic ballads that I'm relatively indifferent to.  More Tale Tales to follow...

I had TT&T's Revenge album in my top 30 aus albums of all time for the recent Triple J hottest 100 of all time (sadly it didn't make my final 10). I didn't even know about Shiver. Saw them just after the release of Revenge at the ANU bar a good if not great show (apalling support act too from memory). Whatever came of Matt Delahunty?

Will be interesting to see what they sounded like early on.