Troubled Hubble - The Sun Beamed Off the Name Maurice (2000, The Magic Spot) 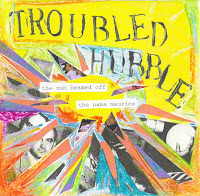 I was damn near-blown away with Troubled Hubble's 2005 parting shot, Making Beds in a Burning House, a slightly nerdy stab at otherwise brilliantly sculpted indie guitar pop, that at the time reminded me vaguely of the Dismemberment Plan (go figure they used DP guitarist Jason Caddell to produce it).  Imagine my amazement when I found this DIY 2000 artifact in a thrift shop a few weeks ago (ok, are you done imagining yet)?  With it's crazy, collaged album sleeve motif and off kilter track titles like "Mean Italian Ducks Pt. II" and "Everything's Going to Be Fine (in Canada)" I assumed I'd just stumbled upon a lost treasure trove of ultra lo-fi T/H tracks to serve as a logical precursor to said Making Beds... album.  Much to my chagrin, not quite.  It wasn't so much that The Sun Beamed Off the Name Maurice painted Trouble Hubble in a more nascent or premature light, rather the band was a different beast at the time of this recording.  As it turns out, The Sun Beamed... was the Illinois based quartet's debut, and for a starter album they were reasonably proficient.  If anything maybe it's the relative cheeriness of this disk that got under my skin.  Ever hear the old adage, "brevity is the soul of wit?"  Well, at the time of this recording, T/H seemed to be tacking in a wilfully wry direction that was unfortunately neither witty or brief.  Sort of like King Missile at moments, sans most of the verbose drivel (thanks for sparing us).  Nonetheless if you're familiar with Hubble's later work, this is still a download-worthy curiosity, not to mention otherwise unavailable, even via their own merch page.  Enjoy (or not).