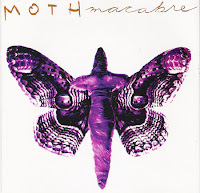 I remember virtually disregarding this when it came out back in 1993.  Too samey and derivative I thought.  Pulled it out again a few years later.  It still didn’t gel with me, but I wasn’t compelled to discard it or trade it in either.  For the longest time I went under the mistaken premise that “Moth” was the name of the band, and that “Macabre” was the album title.  At any rate, I’m glad I hung onto it, because I have a far better appreciation for Moth Macabre these days, albeit posthumously by nearly two decades.  A coed four-piece that called San Francisco home base, M/M had an intense penchant for dynamics, entrenched waist deep in the Pixies quiet/loud/quiet algorithm.  The screaming opener “All Great Architects Are Dead” is a sheer knock out, and although the remainder of Moth Macabre isn’t quite as startling, it is rewarding.  I’m hearing a little Smashing Pumpkins and Drop Nineteens on here too.  To add another wrinkle to the equation, frontman Daniel Presley is often a dead ringer for the Straitjacket Fits Shayne Carter.  You can download a live M/M show (featuring a nifty Velvet Underground remake) on this page curated by guitarist Tom Risse.  The video for “All Great Architects…” is below.

A unisex band with the same haircuts? I see where they get the macabre from!

Even for their era, the look was pretty ridiculous.

I've been turning people onto this LP (or trying, unsuccessfully) for nigh on 20 years. Knowing someone else digs it makes me feel just a little bit less insane.

I remember seeing these guys open for somebody in the 90's (maybe Belly) and all I could think was, man, "I like the Pixies too, but if I wanted to hear them, I'd go listen to them not form a crappy knock-off band"

I interviewed them in 1993 for my ratty little fanzine [sub]Zer∅. I'm glad people didn't judge books by their covers quite as harshly back then. Great band; nice people. -Greg Purvis

I still have it, but my impression hasn’t changed at all, they were a Pixies ripoff act down to the titles (“Lemuria”? Come on...) to the point of almost sounding like a tribute band, but without a hint of that great band’s humour and mighty songwriting power.